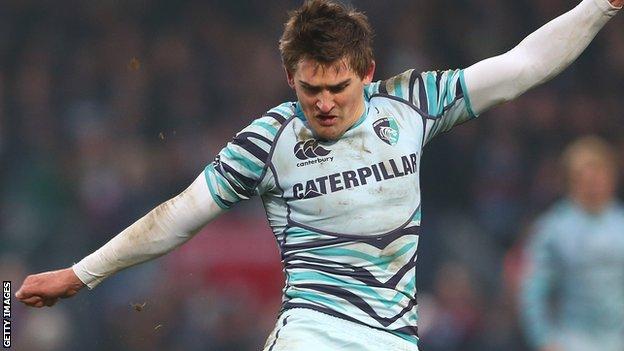 Toby Flood kicked four penalties from four attempts as Leicester Tigers moved up to second with victory at Exeter.

The England fly-half, who captained the Tigers, kicked three penalties with Gareth Steenson replying with three for Exeter for a 9-9 half-time scoreline.

Flood's fourth penalty ensured Tigers moved to within a point of leaders Saracens, who have a game in hand.

The game had a dramatic conclusion as Steenson missed the target with his last-minute penalty attempt.

Steenson's 10th-minute penalty from 30 metres gave the hosts the lead, but Flood kicked two penalties in six minutes to put Tigers 6-3 ahead.

Leicester, despite their dominance, could not pull away and Steenson's second successful kick, after lock Dean Mumm was taken out at the line-out, levelled the game.

Flood and Steenson again exchanged penalties to ensure the two sides were level at the break.

The Tigers looked set to score the opening try as Ben Youngs passed outside to Matthew Tait but, with a three-man overlap, the full-back took the wrong option and was tackled short of the line by wing Jack Nowell.

The game changed in the second half and it was Exeter's turn to dominate, although they were unable to turn any of that pressure into points.

Flood's 35-metre penalty - his fourth successful kick from four - edged the visitors in front for a third time.

Steenson had a chance to level in the last minute but missed the target, so the hosts had to settle for a losing bonus point.

Exeter head coach Rob Baxter: "We had a kickable shot at goal when it was 9-9, but we turned it down and tapped and then we tapped again instead of clearing our lines with a kick. This gave them a piece of pressure that led to their winning penalty.

"You look at two moments like that and you can pull your hair out thinking 'what we are playing at'. We do encourage the guys to go for it and make decisions, but there were a couple of bad ones today.

"When we play the top Premiership sides, when they are coming full on with their internationals back in, you have to make sure that you are in the fight for the full 80 minutes.

"That part of it was fantastic for us, but what we have to add to it is, along with all that physical endeavour, those couple of moments of clarity that decide a 12-9 game."

Leicester director of rugby Richard Cockerill: "We worked very hard and we had to integrate players back into the side after international duty.

"From my own experience, when you have a poor experience with the national side you want to come back to your club and get straight back into it. That is probably what you need rather than having the rest.

"I'm delighted with this win, the attitude was great. We could have done things better at times but that is life and you take the points. We had a bit of luck but we earned that probably against a good side.

"We picked as good a side as we could put out because we have respect for Exeter and how good they are on their own ground."