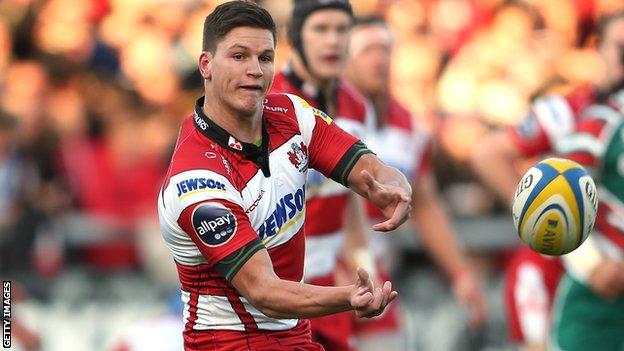 London Welsh ended a turbulent week with a one-point defeat at Gloucester.

Freddie Burns and Gordon Ross kicked two penalties each as the teams were level at 6-6 at half-time.

London Welsh, who are waiting on the outcome of their appeal against a five-point deduction, then went ahead through another Ross penalty and Phil MacKenzie's try.

We just to try to keep our focus on what we can influence, which is results and the scoreboard. We need to keep believing

But Burns took his tally to 15 points with three successive penalties to win the game for Gloucester.

Welsh have appealed against their points deduction for fielding an ineligible player - scrum-half Tyson Keats - in the Premiership this season, and the result of their appeal hearing is expected to be made public at the start of next week.

The early part of the game was littered with mistakes, although Burns and Ross both kicked penalties inside the first 11 minutes.

Ross then put the visitors ahead, before Burns landed a penalty on the stroke of half-time to ensure the two sides went to the interval level.

Gloucester wing Jonny May was sin-binned for a deliberate knock-on inside his own 22, and Ross duly kicked his third penalty of the afternoon.

The only try of the game came soon after as MacKenzie finished off a well-worked move after James Tideswell was tackled just short of the line.

The conversion from Ross hit the post and he then missed a penalty attempt.

And Burns made London Welsh pay with three penalties in 13 minutes, with the last one coming five minutes from time.

"They were very tough to break down and they put a lot of pressure on us. On our part we didn't really deal with that pressure that they put on us.

"We didn't take control of the game like we'd planned to, some of that is down to London Welsh but most of it is down to ourselves.

"However, the team stuck to their guns and in the last 20 minutes we started to see signs of what we were hoping to see. The resilience again shone through and you can't fault that.

"To come away with a win and come back like we did is good, but overall I thought the performance was poor and we're not accepting that. We've got a lot of work to put in for next week."

"When I joined London Welsh I said there wasn't an experience in rugby that I hadn't come across, but I was wrong. What is going on is another test that is energy-sapping.

"We just try to keep our focus on what we can influence, which is results and the scoreboard. We need to keep believing.

"When you are a professional sportsman, 80% of the time is dealing with rejection and disappointment, and you have to have a mental toughness to deal with that.

"We need to turn up next Saturday at Bath and do the best we can, and then likewise against Northampton, London Irish and Worcester. Can we win the four games? Potentially, we can."