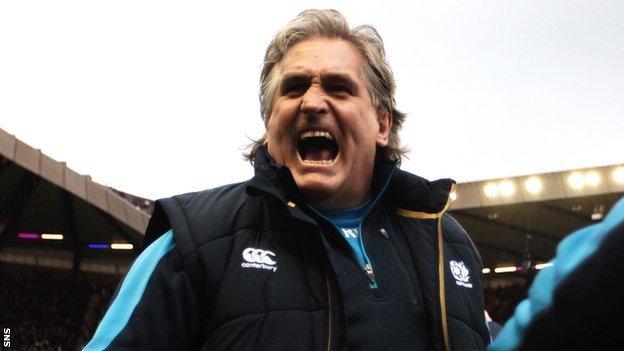 The charismatic Australian, as interim head coach, guided Scotland to third place in the Six Nations with home wins over Italy and Ireland.

"I think Scott Johnson has proved that he has the tactical nous," said Nicol.

"He and [forwards coach] Dean Ryan have done everything they were asked so I would like to see him get the job."

Nicol, now a rugby pundit, added: "The pair of them worked very well together. They have created an environment that the players like, it's a very happy camp.

"I think they have laid the foundations for real progress. It would be a bit ludicrous to take away that foundation and start again.

"He has brought a smile back to Scottish rugby, there is no doubt.

"The atmosphere at Murrayfield has been cracking in the three home games.

"If he is the right man, let's make that decision quickly and put it to bed."

Ryan only began his role at Murrayfield in January and has since said that he plans to return to work as a TV rugby analyst.

Reflecting on Scotland's Six Nations campaign in general, Nicol described it as "promising and successful in many ways", adding: "We were competitive in every game, maybe bar Twickenham, although we put up a reasonable show.

"I think having won two games in the last three championships surely we take two wins in this championship as real progress. I take the positives from that.

"Our resilience has been really strong. Defensively I thought we were really good. Offensively, we are still lacking. That's where I'd like to see the development.

"If you could marry some of the better attacking play against Italy against the likes of Wales and England then this Scotland team can start moving up the world rankings and be really competitive at the end of the tournament."