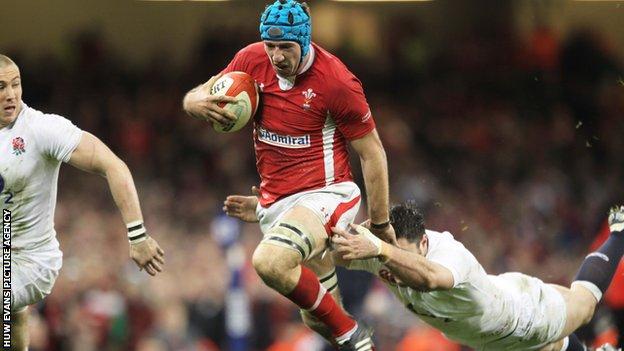 Wales flanker Justin Tipuric says he is not even contemplating selection for the British and Irish Lions' tour to Australia.

Ospreys player Tipuric was man of the match in Saturday's record 30-3 victory over England at the Millennium Stadium.

The 23-year-old, who has won 15 Wales caps, played a key role in helping retain their Six Nations title in 2013.

"I don't think anybody is thinking about the Lions when you are out on the field," said Tipuric.

If the Lions is meant to be then it is meant to be and that is how I see life in general. You just have to concentrate on the here and now, rather than what might happen then

"Everybody just wants to represent their country, especially against England, with the history behind it.

"You grow up as a kid, seeing the big games between Wales and England played at the Millennium Stadium.

"There are names are flying about everywhere, there are so many good sevens out there, it's never going to be easy, but as a rugby player, to represent the British [and Irish] Lions is obviously the pinnacle of your career.

"If the Lions is meant to be then it is meant to be and that is how I see life in general. You just have to concentrate on the here and now, rather than what might happen then.

"You just have to stay grounded. You have to politely take the compliments but you can't take anything for granted.

"You just want to be the best player you can be. I am not the finished article and just have to keep working hard."

The 23-year-old played a key part in both of Wales' tries, scored by wing Alex Cuthbert, and his performance has led to him being talking about as a candidate for the Lions Test side.

Warren Gatland's Lions face Australia in the first Test in Brisbane at the end of June.

But Tipuric has only one thing on his mind and that is playing for the reigning Pro12 champions, the Ospreys against the Newport Gwent Dragons in a Welsh derby on Friday night.

"I want to play on Friday night," said Tipuric.

"The likes of Toby Faletau and maybe Dan Lydiate will be back so it is never going to be easy. I just hope Toby does not run over me too many times."