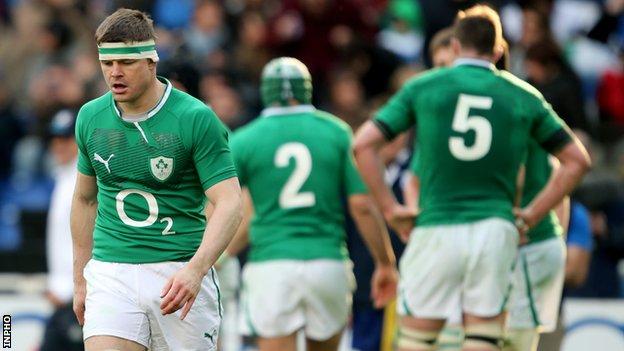 Declan Kidney says he will consider his future as coach after Ireland slumped to their first Six Nations defeat by Italy on Saturday.

Kidney's contract expires in the summer and the chances of it being renewed by the Irish RFU look slim after the 22-15 loss at the Stadio Olimpico.

"I was not thinking this could be my last match. I was concentrating on getting the win," Kidney said.

"I wanted to get a result out of today, we did not manage to do that."

The Ireland coach continued: "We will reflect on it over the coming days and weeks.

While succumbing to Italy may spell the end of Kidney, it could also have been 34-year-old centre Brian O'Driscoll's last Ireland match with his future undecided beyond the summer.

O'Driscoll, who was winning his 125th cap for his country, spent 10 minutes in the sin-bin for stamping and was fortunate to escape a red card for an offence that could well result in a suspension.

"Brian has had a strong Six Nations given everything that has been going on for him," Kidney said.

"He was outstanding against Wales and had a good match against France. I thought he did well today too.

"He has earned the space and time to be able to make up his own mind. Players are the only ones who know when the time is right to go."

Paddy Jackson kicked all of Ireland's points with five penalties and captain Jamie Heaslip conceded that they had been outplayed.

"We gave away too many easy shots at goal and also turned over a lot of ball at the set piece. They cut us off at source," Heaslip said.

"The set-piece is a big launching platform for any team, so to lose that was frustrating. But we were still in it until the end, despite the injuries."

It was the Azzurri's first victory in this fixture since joining the tournament in 2000.

"We are a squad that is improving," said the Italy skipper.

"We play France and Ireland in the group stage of the 2015 World Cup and we have sent a strong message to them."