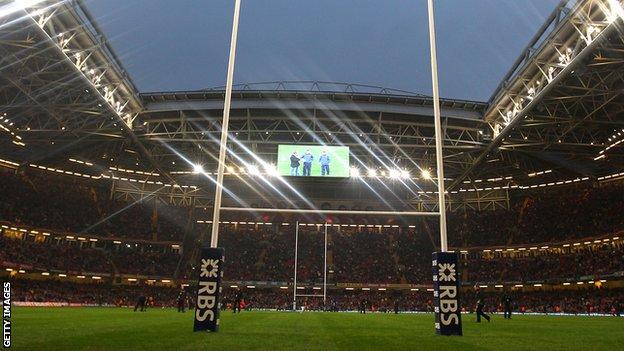 Amid the concerted campaign in the England camp this week to keep calm and carry on as if nothing out of the ordinary was haring around the corner, it was something of a relief when one of the players finally broke ranks.

"I've played in Premiership finals and junior World Cup finals," said full-back Alex Goode. "I've played in some big games. But this is massive. The atmosphere will be electric."

Wales against England in Cardiff on a Saturday tea-time is already as tantalising a feast as anything in the sport. Wales against England with the Grand Slam, Six Nations title and a Triple Crown on the table is the sort of delightful ding-dong that could get a dead man's pulse racing.

Who will come out on top? Arguments will rage until the 17:00 GMT kick-off, but precedent offers precious little steer.

England have lost four of their last five games against Wales in Cardiff, but then Wales have lost five home games on the trot.

Three of the last four matches between these sides have been settled by a margin of seven points or less; overall, the balance is just as tight, England's 56 wins in the contest precisely one more than Wales'.

How will it be decided? The home side will hope on experience. Wales have 647 caps in their starting XV, England 290.

Ten of England's team will be playing at the Millennium Stadium for the very first time. Wales? 12 of their starters won the Grand Slam a year ago, while two - props Gethin Jenkins and Adam Jones - have three of them under their belts.

Goode, characteristically, is relishing the battle ahead.

"You have to enjoy being part of a group of guys that you have respect for, against the whole stadium and the whole team. It's you against the world."

So too is fly-half Owen Farrell, restored to the team after injury, the talismanic tyro whose kicking duel with Leigh Halfpenny could dominate a tight contest. "We're a really tight-knit group. And the more people talk, the tighter we get."

Much of the tactical pre-match will be of the clash between the two open-side flankers, Sam Warburton and Chris Robshaw.

The reality is likely to be more complicated; while the visitors' back row of Robshaw, Tom Wood and Tom Croft looks like three natural blind-sides up against natural scavengers in Warburton and Justin Tipuric plus a born ball-carrier in Toby Faletau, much of England's best breakdown work this season has been done by prop Dan Cole and lock Joe Launchbury.

"We've talked about our final third (of the pitch) being very clean," says Wood, "about putting pressure on the breakdown without giving the ref any easy outs in terms of hands in the ruck or being half a yard offside, around the fringes where the big occasion might get the better of you and you could be too exuberant.

"We've talked about sticking to the plan, sticking to the way we play and making sure we don't get carried away and give away any easy points, because they could easily get a couple of penalties and leave us chasing the game."

Wise old heads will tell you that the side that starts best in these ferocious encounters will often remain on top. Others will point to the impact of replacements in modern rugby and say that it's instead all about the finish.

"We've prepared as well as we have all Six Nations," says Farrell. "We're ready.

"You can't get lost in the occasion. A lot of players talk about big games going quickly because you're lost in it. That is tough, but that's what international rugby is about.

"I always get nervous before a game. You end up playing a game three times in your head before you've stepped out on the pitch. But I just focus on the plan and what we have to do."

Wood, so impressive in his Cardiff debut two years ago, insists he and his team-mates will play free of the weight of both history and expectation.

"It's not a case of 'we have to do it because of tradition' or what the game means. If we get caught up in that we will stumble.

"The bigger everyone else tries to make it, the simpler you have to make it in your own mind."

England have completed five of their 12 Grand Slams away from home - three in Paris, one at Murrayfield and one in Dublin. They have never sealed one in Cardiff.

Should England lose both match and championship on Saturday, would this still represent an advance for Stuart Lancaster's men?

Twelve months ago they also finished second in the table; what is often forgotten amid the debris of the Martin Johnson regime is that his side topped it in 2011.

"Irrespective of what happens at the weekend, we're happy with the way we've been progressing," insists Farrell.

"To be in this situation after where we were at the start of last season is a credit to everyone involved. We've come on leaps and bounds."

The halfway house: England miss out on the Grand Slam, but hang on to the Six Nations title. Would that feel like disappointment after the way the season has gone?

"We want to come away as Grand Slam champions," says Goode, flatly. "That's what is special. That is what will hopefully set us apart.

"We're going to start well, not let them come at us with all that passion and their big runners and let them dictate terms. We want to smash them back."

There are those who see more similarities with the last England side to joust for the Grand Slam rather than the last one to claim it.

The class of 2011 also started off with their best performance, before dropping a little in every subsequent showing. And no Irishman will ever forget the Dublin drubbing that brought that story to an end.

After a four-try blitz against Scotland seven weeks ago, England have scored only one try in the following three matches. Against Italy last Sunday their winning margin was the narrowest ever in that fixture at home.

In the meantime, Wales have won three on the bounce, restoring confidence where a month ago there was crisis. A fourth victory would turn the season into success, the longer-term problems of the game at regional and grass-roots level once again covered up by the deeds at the pyramid's peak.

Is history repeating itself? Will the Celtic connection terminate England's ambitions once again?

"Each performance has been different," argues Goode. "Against Scotland we showed that we were a very good attacking team, but our defence wasn't maybe at its best. Against Ireland we had awesome composure and work-rate in those wet conditions, sticking to the task and fighting a really experienced side.

"Against France, the way they played in the first half was better than anyone has played in this Six Nations. I thought we withstood that really well, and in the last 20 minutes were actually pretty comfortable.

"We weren't very happy with the way we played against Italy, but we created chances - we were just guilty, me included, of not putting them away - and if you don't put teams away, of course they'll come back at you.

"We've taken a lot of lessons from what happened to the team two years ago. We haven't lost an away match in the Six Nations under Stuart Lancaster, and we need to keep that up."