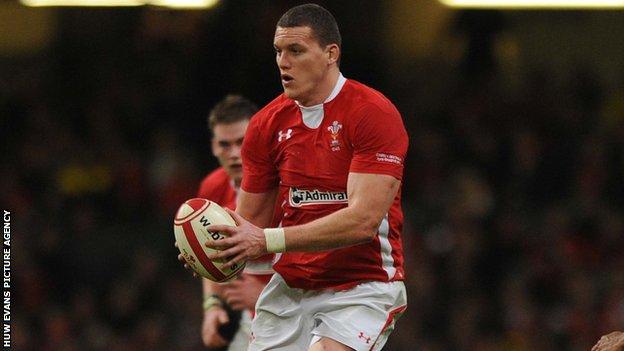 Lock Ian Evans says all the pressure is on England ahead of the Six Nations title decider with Wales on Saturday.

Wales can deny England a first Grand Slam since 2003 at the Millennium Stadium.

The 2012 Grand Slam winners can win the Six Nations title if they beat England by eight points.

"I would say the pressure is on England," said Evans, who wins his 30th cap for Wales against England.

"They are coming to Wales to play for a Grand Slam and that is a hell of a lot of pressure.

"We went to Twickenham to win the Triple Crown and most of the boys felt the pressure then but we came through it.

"We have got that experience but it's unknown territory for the English boys coming here for the Grand Slam."

Evans is one of 12 players in Wales side to face England who started the Grand Slam decider against France last season. He is also one of the five Ospreys in the Welsh pack which has impressed during this Six Nations campaign.

They will face each other under a closed Millennium Stadium roof.

The 28-year-old, who was also part of the Wales Grand Slam side of 2008, has emerged as a key player for Wales and will partner his Ospreys team-mate Alun Wyn Jones in the engine room against England.

He was the only international second row available to interim Wales coach Rob Howley at the start of this campaign, with Jones, Perpignan's Luke Charteris and Bradley Davies of Cardiff Blues sidelined with injury.

Evans partnered debutant Andrew Coombs as Wales were beaten 30-22 by Ireland in the tournament opener. Coombs also played against France and Italy before Jones returned for the trip to Scotland.

Ten of Stuart Lancaster's England side have never played at the 74,500-capacity Millennium Stadium and Evans claims Wales' experience could prove to be the difference between the sides.

"We are very confident when you think of where we have come from in the first game," said Evans

"The mood in the camp is very confident and everybody is looking forward to kick off.

"I think experience is invaluable, a lot of our players have played in the big games before and understand what type of pressure that is.

"I think England will be feeling that pressure because it's unknown territory for a lot of those players coming into this week.

"It's always easier to play in front of your own crowd, especially this week with the opponents we face and the support we are going to get

"They have to come here and beat us on our home patch. We want to spoil their party and stop them getting the Grand Slam, so we have to get the win."