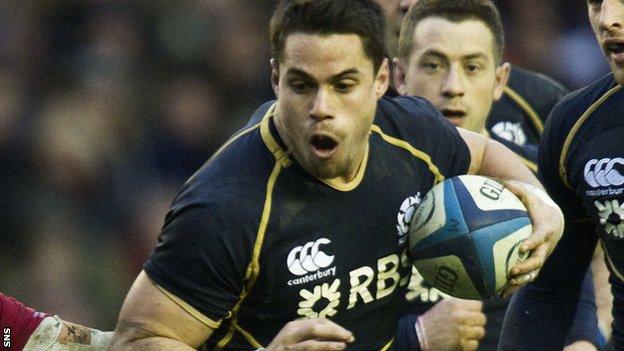 My debut try for Scotland against England was an undoubted career highlight but if you were to ask me the memory that will stay with me from the 2013 Six Nations championship, it has to be the Ireland game.

It was one of the most satisfying victories I've ever been involved in.

It's hard to explain my feelings at the final whistle at Murrayfield against one of the best rugby nations in the world.

That grinding performance was testament to the 23 players involved. I'd rather win than score four tries in a game and lose. Hopefully, on Saturday against France we can come up with another great effort from the guys.

Against Wales it was quite tight. In the end the Welsh didn't make as many mistakes.

As a back I got a lot of counter-attack ball but we didn't make the most of our opportunities.

We need to get more ball on the front foot; that's the way to put a team to the sword. Lightning quick ball is the key and that's what we'll be looking for in Paris.

Playing in this competition has been an awesome experience and the Scotland supporters have been fantastic.

A crowd of 50,000 at the Italian game and two sell-outs against Ireland and Wales have given me the opportunity to play at the home of Scottish rugby immersed in an electric atmosphere. It's gone so fast and that sucks...

When I first started playing rugby I got a great piece of advice from some of the senior players I played with. Make the most of your opportunity, don't take anything for granted.

Every time I go out onto the pitch my main goal is to make the most of every game I play in. And 80 minutes of international rugby goes by so quickly.

The fantastic thing about this season is that so many of my Glasgow team-mates are also in the Scotland squad and yet the Warriors are sitting top of the RaboDirect Pro12.

We recognise that we will have to work hard to get back into the team. There's a real buzz about the Glasgow boys in the squad. It's exciting and it would be great to get some silverware at the end of the season.

I think the game against France will be very different from the games against Ireland and Wales.

Both teams will be going out there to score some tries, at least I hope so. You never know with France though.

In the last World cup New Zealand beat them easily in the group stages then in the final a different team turned up and the gave the All Blacks a real fright.

It's been strange that the French haven't fulfilled their potential in this year's championship. That's the scary thing.

Their mindset this week will be all about not getting the Wooden Spoon. They will expect better and the French crowd will want more from Les Bleus.

We know that they'll kick the ball a lot. We have to play rugby against France; spinning the ball around and not being too direct.

It's good to have Al Strokosch back for this game. He brings another dimension to our game. He's a big ball carrier for us.

It's good to be on his side. I wouldn't like to be running against him! As for Johnnie Beattie his back-row team-mate, if he gets space he's deadly. We need to get him into the game early and let him loose.

So this is my final game in the 2013 Six Nations Championship. We want to win and win well in Paris. The team spirit in the squad is fantastic, that spirit could be the key to success in France.

Sean Maitland will be writing a column for the BBC during the Six Nations campaign.