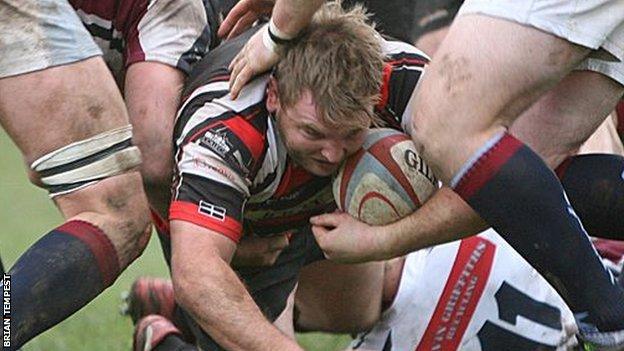 Worcester Warriors have completed the signing of Cornish Pirates prop Paul Andrew, who will move to Sixways at the end of the season.

Truro-born Andrew, 23, primarily a loose-head, will compete for the place to be made available by the imminent departure to Wasps of Matt Mullan.

Andrew has scored six tries in 80 appearances for the Pirates.

The Warriors have further bolstered their front row by persuading young hooker Ollie Hayes to sign a new deal.

"In the front row you have got to do your apprenticeship and next year is undoubtedly a big season for Ollie," said Warriors coach Richard Hill.

We feel he can make the step-up to play first team rugby in the Premiership and that's why we've re-signed him.

"We feel he can make the step-up to play first team rugby in the Premiership and that's why we've re-signed him. He is a very dedicated individual, a very good all-round player, who can carry and has excellent hands.

"Now is the time for him to make the step-up. This is not a decision we have taken lightly, but Ollie really is the modern day hooker and we have put our faith in him."

Andrew made his league debut for Pirates at the age of 19 and has represented Cornwall, Cornwall Under-20s and England Conference Under-18s.

He follows the same route from the south west taken by George Porter, who joined Worcester from Plymouth Albion two years ago.

"He is similar to George Porter in that he has massive potential and will only get better," added Hill.

"He is a player we've been aware of for some time. We keep a track on the best players in each position and have seen Paul's progress in the Championship."

Andrew was in trouble with the Rugby Football Union in January 2012 when he was given a two-week ban for hair-pulling during a match against Plymouth Albion.

Worcester, who are not yet completely safe from the threat of relegation, lie ninth in the Premiership table with five games to play.

However, they could all but seal their place in next season's top flight if they win at London Irish on Saturday.