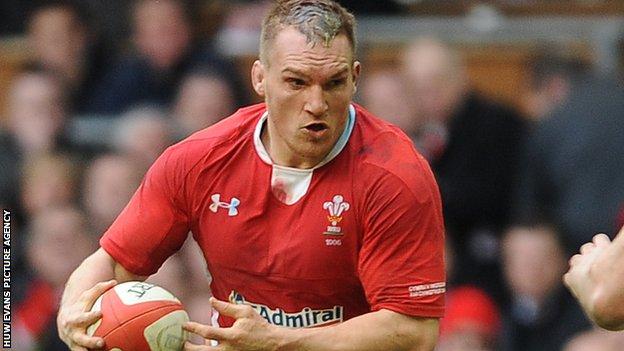 Prop Gethin Jenkins will captain Wales instead of Sam Warburton for the Six Nations title decider against England at the Millennium Stadium on Saturday.

The Toulon loose-head returns in place of Paul James after missing the Scotland game with a calf injury.

Justin Tipuric replaces the injured Ryan Jones in the other change to the side that beat Scotland 28-18.

Jones, out with a broken shoulder, hands the captaincy over to Jenkins, who will lead Wales for a fifth time.

The last of Jenkins' four appearances as captain was the 24-3 win over Italy in 2012.

Tipuric and Warburton will start for Wales for the first time, with the former Wales captain switching from open-side flanker to the blind-side to accommodate the young Osprey.

With Warburton taking the man of the match award in the victory at Murrayfield it would seem Howley wants the Blues star to concentrate on his own game.

"The players have worked very hard to put themselves in this position for Saturday, with three hard fought victories on the road," said interim Wales coach Rob Howley.

"Gethin comes back in and will captain the side and his leadership will be invaluable.

"Saturday is a big finale for the tournament but we have a very experienced squad, who have been in this position before, that have played in big games and that will be important come kick-off."

British and Irish Lion Jenkins, capped 97 times, will be considered something of a surprise to lead the side especially as he only returned to training on Monday.

Sam Warburton, captain for the opening 30-22 Six Nations defeat to Ireland, and Alun Wyn Jones had been seen as the front runners as skipper.

It is the first time Wales, who need to beat England by a margin of seven points to retain their Six Nations crown, have selected Warburton and Tipuric in a starting line-up.

Behind the scrum Wales are unchanged for a fifth consecutive game with Mike Phillips set to become become Wales' most capped scrum-half. On Saturday he will surpass Dwayne Peel's previous record of 76.

James slips down to the replacements bench which includes Scarlets back-rower Aaron Shingler who comes in for Tipuric.