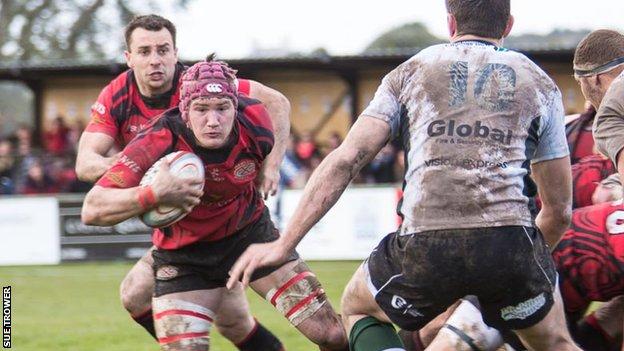 Jersey took a fifth-minute lead from a penalty try before James Arlidge's three-pointer made it 7-3 at half-time.

Arlidge hit a second penalty soon after the break before Wilson was pushed over 10 minutes into the second half.

Wilson scored his second try in similar fashion 10 minutes from time in between two Michael Le Bourgeois penalties as Jersey sealed a bonus-point.

The win cements Nottingham in second place in the Championship while Jersey are now six points clear of bottom side Doncaster having both played 18 games.

Jersey started the brighter as their forwards dominated the early exchanges.

After five minutes referee Martin Fox was forced to award a penalty try as Nottingham could not handle Jersey's pressure at the scrum as Le Bourgeois converted.

Jersey then had Mark Foster sin-binned for a high tackle and saw Arlidge miss one penalty before kicking over his second after 16 minutes.

Nottingham then saw prop Michael Holford and hooker Joe Duffey go to the sin-bin in quick succession for infringements in the ruck.

But Jersey failed to capitalise as Nottingham's defence stood firm.

In the second half Nottingham came out strongly, forcing an early penalty before converting Wilson's try.

Nottingham then staged a great rearguard effort with 20 minutes left as Jersey pushed for the line.

Le Bourgeois reduced the arrears with a penalty but Wilson's second try secured the win for Nottingham.

But Le Bourgeois' excellent long-range penalty in the dying minutes saw Jersey come away with a losing bonus-point.

"Nottingham are a good side and there were periods where we could have goner on and won the game," Jersey director of rugby Ben Harvey told BBC Radio Jersey.

"I can't fault our lads for their effort and they'll get more accurate as they play more games."