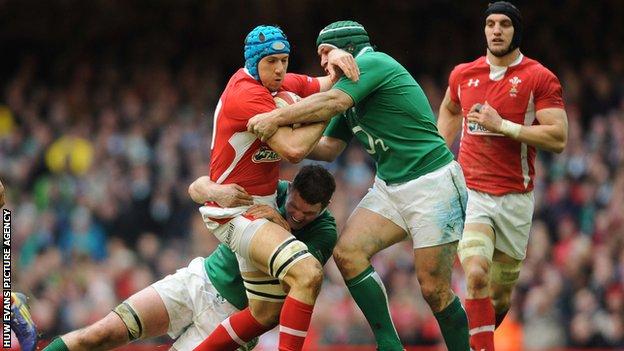 Jones, 32, who captained Wales to wins over France, Italy and Scotland, misses the clash with a shoulder injury.

He believes Tipuric will take his place when the Welsh team for Saturday's Six Nations title decider at the Millennium Stadium is named.

"I have a sneaky suspicion they may both play but they find out on Thursday," said Jones.

Like everybody else, I will be on the edge of my seat to see what XV is picked

"Like everybody else, I will be on the edge of my seat to see what XV is picked."

Warburton and Tipuric are both open-side flankers and have never started together for Wales.

But with Jones, sidelined due to a broken bone in his shoulder, there is the possibility that Interim Wales coach Rob Howley will select the pair for the first time when he names his team at 1pm on Thursday.

Jones, who was given the captaincy when Warburton was injured for Wales' victory over France in Paris, believes the pair can play alongside together.

"You have two world class sevens there," said Jones.

"I think if we were any other nation in the world we would celebrate the fact that we have.

"Sometimes we create competition and an issue that isn't there. They are both world class sevens.

"I have played with Justin for years and he is one of the most wonderfully gifted rugby players have ever played with.

"Sam is a world class combative and is also a good captain and leader and it's players like him that this weekend requires."

Howley does have a number of options to fill the vacancy left by Jones' injury and has admitted he would consider moving Warburton to blindside flanker to accommodate Tipuric at seven - a move that looks increasingly likely.

But the Dragons' Andrew Coombs, who impressed earlier in the Six Nations when he was drafted in to cover Wales' injury problems at second row, is a blindside flanker by trade.

He and the Scarlets Aaron Shingler are in the more traditional mode of a number six and would be a like-for-like replacement for Jones.

While Jones is the only player unavailable, due to his injury, from the side which beat Scotland 28-18 in Murrayfield, prop Gethin Jenkins could be available.

The Lions loose-head, who missed the win in Scotland due to a calf injury, returned to training on Monday and could be selected ahead of Bath's Paul James in the Wales front row.