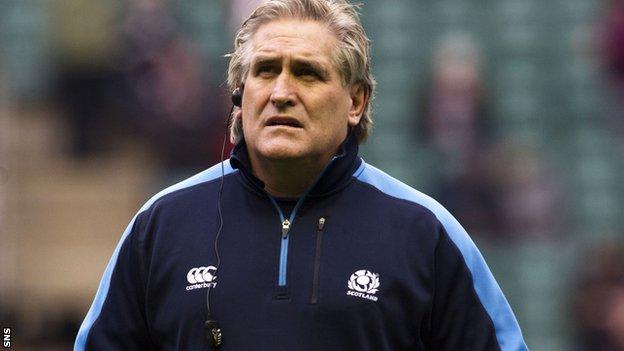 Former Scotland captain Andy Nicol thinks interim head coach Scott Johnson will be a strong candidate for the job on a permanent basis, given recent improvements in performance.

Scotland sit third in the Six Nations table after two wins and end the campaign in France on Saturday.

"If he wants it, it might be there for him," said Nicol.

"In light of where we've been with the Six Nations, it gives him the right to put his hand up for the job."

Scotland opened with defeat at Twickenham but bounced back with a record Six Nations win against at home to Italy and followed that with a gritty triumph over Ireland in Edinburgh.

Last Saturday saw Wales leave Murrayfield with a 28-18 win in a scrappy match littered with penalties.

Despite that setback, Nicol believes Johnson and his forwards coach Dean Ryan have put the Scots on a path to success with a style of play that bodes well for the future.

"I'm looking forward to them going out on Saturday and taking another few steps forward," Nicol told BBC Radio Scotland.

"I think it's not just all about Scott, Dean Ryan has a big role to play in the way Scotland have played.

"The forwards have gone back to basics. The team, in many ways, went back to basics and got the victory, then against Ireland they had to dig it out.

"There's been an improvement and I believe the players are very happy. That's always a key ingredient for any success. I've been impressed with Scott Johnson."

Edinburgh lock Grant Gilchrist will earn his first Scotland cap against France, replacing the injured Richie Gray, while Alasdair Strokosch is preferred to Rob Harley at blindside flanker in the only other change.

"Grant is a very good player for the future, certainly," said Nicol. "It's interesting that the two changes are contrasting, because Strokosch brings experience, but if you go down that route, you would play Al Kellock instead of Gilchrist.

"But Scott and Ryan rate Gilchrist, as I do. He's a very good player, but I could think of easier places than the Stade de France at nine o'clock local time to win your first cap.

"I don't think it's a reflection on Rob Harley, he's played well in these games, especially the first one against Italy - he should have been man-of-the-match, and he'll get more caps."

Despite taking heart from Scotland's recent performances, Nicol believes the visitors' chances in Paris rest almost entirely on how the French react in front of their home crowd.

"It depends which French team turns up," said Nicol. "My concerns, as I've been saying the whole championship, is that at some point, they're going to click - they haven't clicked yet, which doesn't' bode well for Scotland on Saturday night.

"I want them to go out and there and finish on a high. I thought we maybe made a step backwards against Wales, and I would like us to go out and play with the same ambition, the same execution we did against Italy - against a better side, in a tougher environment.

"Just finish on a high."