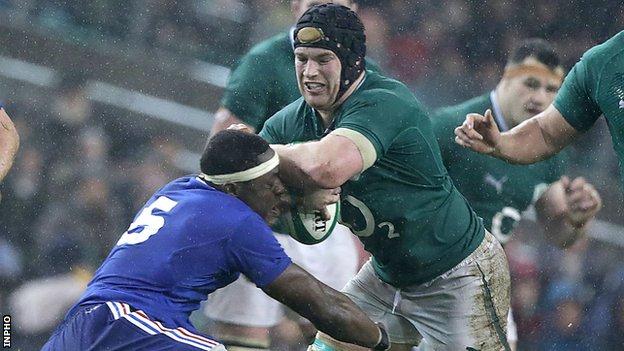 Sean O'Brien refuses to accept that a reckless desire to take ball into contact has led to Ireland's injury crisis in this year's Six Nations.

The Irish campaign has been afflicted by injuries but O'Brien believes bad luck and not bad tactics has been the problem for Declan Kidney's side.

"When we won the Grand Slam in 2009, no-one got injured, so what's the difference?" said the Carlow man.

"They were as committed back then as they are now."

Regular starters Paul O'Connell, Tommy Bowe and Stephen Ferris were ruled out for the entire campaign before the start of the tournament along with Leinster hooker Richardt Strauss.

In addition, back-up players such as Darren Cave, Paddy Wallace and Dave McSharry have also been unavailable for much of the campaign.

Some pundits have suggested that a willingness to stand toe to toe with opponents has proved Ireland's undoing while there is also a theory abroad that the simple matter of genetics is hampering Declan Kidney's squad.

However, O'Brien is not convinced by either of those arguments.

"I'm not sure that the size disadvantage is hampering our performances," the Leinster flanker said.

"You could go back and look at the whole championship - our discipline let us down in one game and we weren't patient enough in another.

We don't want to be thinking about wooden spoons

"We're matching teams physically, but obviously with our genetics, we're not a big race.

"If you compare us to Argentina or South Africa, they're just big men naturally and when they start to lift weights and whatnot they get bigger.

"(But) I don't think it has hampered us.

"Sometimes you just get unlucky with injuries, get a run of injuries, and that leads on to different things, but I still think we're able to mix it with the best of them."

Italy's impressive display in Sunday's 18-11 defeat by England at Twickenham suggests that the Irish will face a difficult task to maintain their record of never having lost to the Azzurri in the Six Nations.

O'Brien is expecting a "massive physical challenge" against the Italians in a game where defeat could see the Irish landing the Wooden Spoon.

"(Sergio) Parisse is one of the best players in the world, he has an all-round game," added O'Brien.

"He's good in the air, he's good at carrying, good defensively and is able to poach. He's an all-round back row and is a go-to man for Italy."

However, O'Brien insists that the possibility of a first Wooden Spoon since 1998 has not been a topic in the Irish camp this week.

"We don't want to be thinking about Wooden Spoons. It'll be the same as last week. I said then that we didn't have the option to lose. That didn't happen

"Training has been sharp, it was last week too. If we can take that confidence and build on it we should be okay."