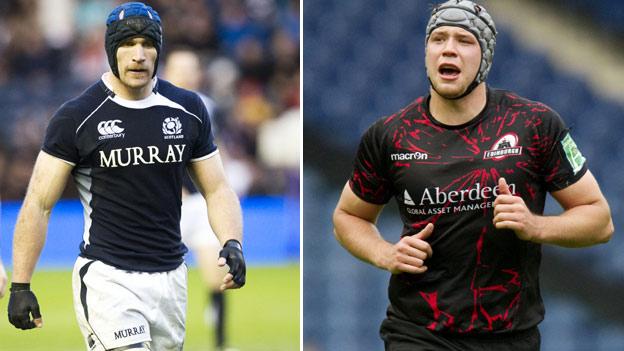 Gilchrist replaces the injured Richie Gray, while Alasdair Strokosch is preferred to Rob Harley at blindside flanker in the only other change.

Gray was carried off during Scotland's 28-18 Six Nations defeat by Wales last weekend.

"It's a very special moment and a massive opportunity," said Gilchrist.

The Scots are looking for their third win of the campaign and interim head coach Scott Johnson has urged his players to shine in Paris.

"We've got to get our basics right," he said.

"We've got to win the contact area, be disciplined in our approach, and get some front-foot ball for our backs. We also want to end the championship on a high.

"I've been impressed with Gilcho. I've spoken of form and future and he fits the bill in the latter category but he's also keen as mustard and we want to look at him in the company of a very good French side.

"We looked at every position in detail after last weekend and we reckoned that Strokosch's experience gave him the nod in the back-row.

"We're not reading much at all into where France are in the table. France are wounded right now and we expect them to come out all guns blazing on Saturday.

"But the target for us is to concentrate on our game and aim to be as high up the table as possible come full-time in Paris."

Victories at home to Italy and Ireland mean Scotland are already guaranteed to avoid finishing last for the second year in a row.

The wooden spoon, however, is a very real prospect for France, who have picked up just a solitary point in their opening four matches.

Gilchrist follows Harley, Sean Maitland and Duncan Weir, who have all been handed their first start for Scotland by Johnson in this campaign.

"It's a massive opportunity for me, something I have dreamt of since I was a kid, to play for Scotland. I just can't wait to get on with Saturday night," he said.

"It's brilliant that Scott is willing to show faith in us young guys - but it is up to us now to deliver."