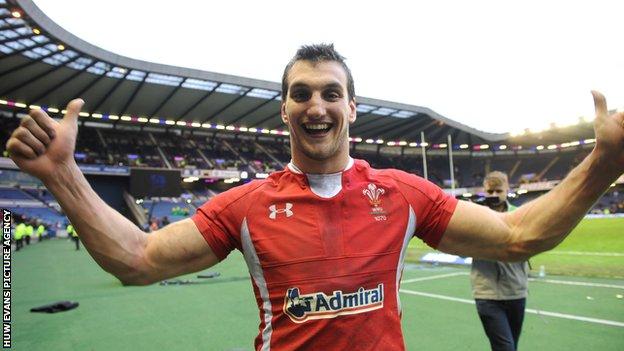 Ex-skipper Michael Owen says returning the Wales captaincy to Sam Warburton could be a masterstroke in Saturday's Six Nations decider with England.

Ryan Jones, who led Wales against Italy and Scotland, has been ruled out with a shoulder injury, leaving a vacancy.

Captain against Ireland, Warburton missed France with injury, was dropped to the bench in Italy and played under Jones in Scotland.

Sam is a big player and big players relish pressure

"It will be something that will really inspire him [Warburton]," said Owen.

"With Sam Warburton inspired it will give Wales a better chance of winning the game because he is such a threat to England at that breakdown, which is all-important.

"He is the incumbent captain if you like. I know Ryan Jones has taken over the last three games but I think Sam Warburton had established himself as Wales captain."

Owen took over the captaincy from the injured Gareth Thomas to lead Wales to the 2005 Grand Slam against Ireland at the Millennium Stadium.

Forwards coach Robin McBryde revealed on Tuesday that the Wales management are still considering the captaincy ahead of Thursday's team announcement.

But 24-year-old Warburton was back to something near his best in winning a 37th cap to take the man-of-the-match award in the 28-18 win over Scotland at Murrayfield.

Owen believes interim head coach Rob Howley should take some brave decisions going into the championship decider, with his side needing an eight-point win over Grand Slam-chasing England to guarantee successfully defending the title.

"Wales should be bold and look to give him give him [Warburton] the captaincy and play him alongside Justin Tipuric and not worry too much about England and their line-out capability," said 41-times capped Owen.

"Sam is a big player and big players relish pressure. It inspires them and makes them play well. He would be the best choice of captain.

"It is [Ryan Jones' injury] a big blow for Wales definitely. Ryan has been playing really well and has come in a done a good job as captain as well, but I think it is one Wales can overcome with the quality of players they have got in reserve.

"Hopefully Justin Tipuric gets an opportunity to play alongside Sam Warburton. He has been the form forward in Wales certainly over the last 18 months and deserves an opportunity.

"I really hope we see Sam Warburton and Justin Tipuric play together and I think they will be able to make it really difficult for England."