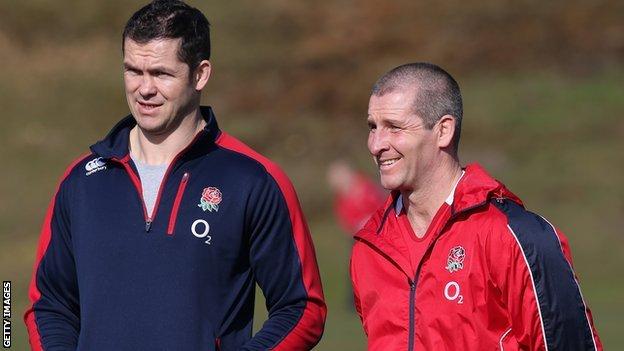 Defence coach Andy Farrell insists England have the character to overcome a more experienced Wales in their Six Nations decider on Saturday.

England travel to the Millennium Stadium aiming to secure the title against the reigning champions, with the prospect of a first Grand Slam since 2003 also on the cards.

"When we have had a challenge thrown at us we have responded," said Farrell.

"It is the ultimate test to go there and win but it is where we want to be."

Since head coach Stuart Lancaster took over at the beginning of last year, England have won four successive Six Nations away games in Edinburgh, Rome, Paris and Dublin, drawn a Test in South Africa and beaten world champions New Zealand at Twickenham.

They are unbeaten in four games heading into the final weekend of Six Nations action and lead Wales, who have lost once, by two points.

An eight-point victory for Wales on home soil would give them the championship, although a seven-point margin could also be enough.

If the teams end with the same points difference, the title would be decided on tries scored - so far Wales have scored two more than England.

Of England's likely starting line-up, 10 have yet to experience playing at the Millennium Stadium, although nine of the match-day squad did play in their 26-19 victory in Cardiff in the 2011 Six Nations.

A dozen of Wales' likely starting side sealed the 2012 Grand Slam five months after reaching the semi-finals of the 2011 World Cup.

"Wales have been there and done it," said Farrell. "They have been a tremendous side over the years. They have a lot of experience and won Grand Slams.

"But we don't mind a bit of adversity. It is where we have been good in our short time together.

"Experience has to start somewhere and we have to be challenging to win our first trophy."

Wales have not conceded a try in their last three matches, while England failed to score a try in last week's unconvincing win over Italy.

"We didn't have the composure to convert our chances into tries and we have to be better at that," added Farrell.

"Tries don't just come from attack. They can come from set piece, from your kicking game, from all areas of the field.

"We have to make sure all areas of our game are switched on this weekend to break that good defence Wales have."