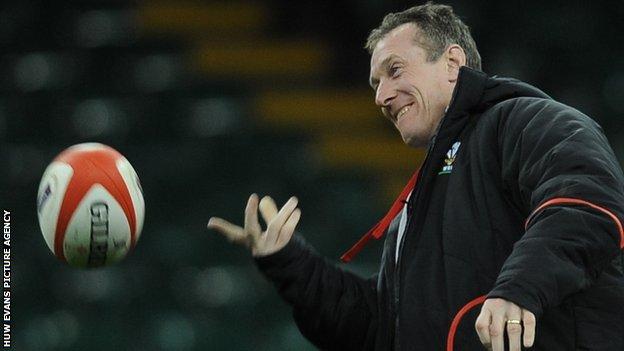 while Gatland prepared for the 2013 British and Irish Lions tour to Australia.

Ruddock, the 2005 Wales Grand Slam coach, said: "He won't be getting ahead of himself. He's done fantastically well.

"They won back-to-back Championships, which is an incredible achievement."

"All they've done, particularly Rob, is put his hand up and said 'look, if I was to get the Welsh job in the future, I've proven I can work through some difficult times and come out with some good results'," Ruddock said.

However, Ruddock is delighted for Howley and believes Wales' Six Nations triumph was underpinned by sound principles and a belief in how the coaching team and players approached their task.

"It's fantastic for Rob and he thoroughly deserves it. He's a good guy, a top guy and one of rugby's good people and I'm very pleased for him," said ex-Swansea and Worcester coach Ruddock.

Stuart Lancaster has done a great job with England, everything's been going superbly for them and then obviously they've sort of presided over a train wreck then on the last Saturday

"And it'll be a great experience for him because having started the tournament with that loss against Ireland, to show that sort of resilience and belief in what he was doing and turn the team around and get the selection right, really, is a fantastic achievement.

"And it's something that will stand for him in the longer term and hopefully when he does become the Wales coach, one day, when Warren Gatland eventually leaves."

Ruddock would welcome a Welshman such as Howley again being placed in charge of the national team.

And he says Howley would readily acknowledge the work of his back-up staff such as Shaun Edwards (defence), Robin McBryde (forwards), Neil Jenkins (skills) and Mark Jones (interim, attack).

Ruddock added: "I always remember when I took over the Welsh team Clive Rowlands (Wales coach 1968-1974) said to me 'look Mike, if you get selection right, you'll do fine and the Welsh team will look after itself to a certain degree'.

"And he was absolutely spot on with what he told me.

"And it sounds like Rob has done very well in that regard, picking the right team, picking by his values, his beliefs and coping with injuries as well."

Wales suffered an eight-match losing run, including four defeats by Australia, as well as losses to Argentina and Samoa, before kicking off the Six Nations with defeat by Ireland.

Ruddock says the experience will stand Howley in good stead.

He said: "I think particularly for Rob it's been a bit of a new type of situation to be involved in because he hasn't been hugely experienced as a head coach before.

"So it would have been new ground for him.

"But for those of us who have been through the mill, you know that there are ups and downs in rugby and you've just got to stick to those beliefs.

"I think he's definitely in a good position to kick on, but Rob won't be carried ahead of himself either - none of them will.

"We all know in coaching and rugby how quickly things can change.

"[Coach] Stuart Lancaster has done a great job with England, everything's been going superbly for them and then obviously they've sort of presided over a train wreck then on the last Saturday of the tournament.

"Those things can happen... you're on a roll and the next minute you're trying to pick up the pieces and rebuild the thing again and kick on again.

"He won't be getting ahead of himself. He's done fantastically well. They won back-to-back Championships, which is an incredible achievement."