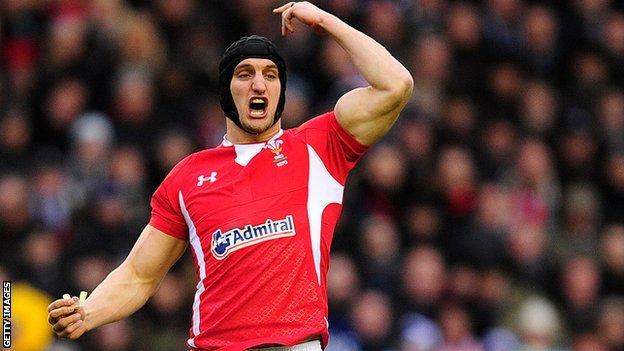 - Who will win the Wales v England title decider

- Why England are struggling to score tries

- How many Scots will make the Lions Tour

Hi Azaer, straight to the point as always. Quite simply, I believe Wales will win the match and England will win the title, ie Wales will not secure the likely seven-point victory that would see them overhaul England at the top of the table.

Hi Jeremy, who was the best coach you ever played under and what would he be doing this week in the build-up to the game against Wales to make sure that the Italy performance wasn't repeated by England? Buccaneer

Hi Buccaneer, I can't single out one coach, but Brian Ashton and Ian McGeechan were two of the best coaches I ever had the pleasure to talk with about how the game can be played. I'm really not sure what Geech and Brian would do leading up to a Grand Slam game though, because it's hard to get inside the minds of others.

I had the good fortune to play in four Grand Slam games. The first, against Scotland in 1990, was strange because I didn't know what to expect as I hadn't been in that situation before. All I knew was that I wanted to win another game, but Scotland played better and deserved their 13-7 win, which also gave them the Grand Slam.

France the following year was different. We knew what we had to do and just about got across the line 21-19. In 1992 we got past Wales, nilling them at home, and in 1995 we beat Scotland, again at home.

For the first two Slams, manager Geoff Cooke was a cool and very calming influence, largely because of our past experience the year before I think. He, captain Will Carling and the senior players took control.

There's no doubt in my mind the most comfortable camp out of the two will be Wales. They are at home in their usual hotel, doing what they always do in camp at the Vale. England have some glitches to iron out from Sunday, they will also have a moving day and have to get settled in again.

It's a new situation for many of the England team and coaches. It should be a week of chilling, gently simmering without losing it, and staying in the moment without playing the game over and over in your mind.

Staying fresh in the mind will be key. Look out for the interviews during the week and on the day during our match coverage, because seeing who looks the most relaxed will give you an indication of how the game is going to go.

One thought I will leave you with is that it's not just another match. It's a Grand Slam game for England and it's a Championship game for Wales. There aren't many bigger games ever.

In addition, can they finally hold their nerve on the final weekend against Wales away and not repeat the 1989 and 1999 debacles against much poorer Welsh sides than their current team? gjpowell

Hi GJ, the reason for England not scoring in your preferred multiples of five and seven has been down to a number of factors. Firstly, the weather hasn't always been the best for all-out attack and running rugby.

The opposition have also made it difficult to win the quick ball required to play an attacking game, and in addition England have spurned a number of opportunities to score. England have to start producing quick, clean ball, then run or pass into space and start finishing off their chances in order to score tries.

This Welsh team may have been on a record run of defeats before their win in France, but they have now won three away games in a row and as they are playing at home on Saturday they will definitely be confident. In addition, most of this current Welsh side were in the team which won the Grand Slam last season.

We can't predict whether this England team will hold its nerve or not, but the likes of Chris Ashton, Toby Flood, Ben Youngs, Danny Care, Dan Cole, Tom Wood, James Haskell and Tom Croft were all around when England lost away to Ireland in 2011 when they were going for a Grand Slam. I would think Wales will just shade it, given current form and home advantage.

Hi Jerry, England got away with wasting a lot of golden try-scoring opportunities against Italy - they are unlikely to be so fortunate against Wales. Brad Barritt was the chief culprit, doing this on at least two occasions - his decision not to pass immediately before half-time after Mike Brown's break was awful. How long can his defence keep him in the side when such moments often decide big games? charlie_chalk

Hi charlie_chalk, Brad Barritt's defence has been integral to England's performances recently and generally it has been superb, but Saturday was one of those matches where he appeared to be ineffective.

After he took the ball into contact following Mike Brown's break and the subsequent ruck, England still should have scored, so I will let that one go.

However, the pass that was on for Tom Croft in the second half should have gone. Unfortunately certain players are more likely to retreat to their default action under pressure.

Barritt isn't renowned for the excellence of his passing, ability to make breaks or try scoring, but his great defence will keep him in the team until Billy Twelvetrees, or another player, gets close to his tackle success rate.

Hi Jeremy, watching a performance like England produced on Sunday, was I the only one wondering what happened to exciting backs like Ben Foden, Matthew Tait and Christian Wade? How far are these guys from the team in your opinion, as I think they could really add some attacking threat to our back line. Olly R

Hi Olly R, the players you mention do have great attacking qualities and if they were playing out of their skins I'm sure they would be in the squad. Remember what happened in the wins over New Zealand and Scotland though - quick ball leading to lots of time and space to attack is what leads to tries being scored.

This current England team have proved that with the right ball they can score tries most of the time and head coach Stuart Lancaster will be hoping the game against Italy was a blip. England will play poorly on occasion from now up until the 2015 World Cup but Lancaster is looking for consistency and to chop and change a team wouldn't provide that.

Hi Jerry, do you think interim coach Rob Howley should get a lot of praise for getting Wales out of an eight-match losing streak to within an eight-point win over England to take the Championship? All the pundits - yourself included - gave Wales no hope whatsoever of winning the title after losing their first game. djw10

Hi djw10, of course Howley deserves praise, Wales have played decent rugby, other than in the first half against Ireland. They have grafted their way into contention and have an opportunity to win the Championship. I've always said the Welsh team individually have good qualities and if they play at their best they are still a good team.

Hi Jerry, if Scotland beat France next week, no matter what else happens, we'll come in the top half of the Six Nations table. Will this have an effect on the number of Scots who travel with the Lions, especially as we've struggled to get many in previous tours? rugbyman

Hi rugbyman, Scotland have moved on a stage in terms of pressurising teams, scoring points and keeping themselves in the game. Winning certainly helps when it comes to being noticed for Lions selection and beating France would make a case for some Scottish players. At the moment I would think Stuart Hogg, Tim Visser, Greig Laidlaw, Kelly Brown, Johnnie Beattie and Euan Murray all have a chance.

Hi Jeremy, what is your opinion about the Vincent Debaty/Keith Earls incident at the end of the Ireland v France match? Personally I think it was a clear penalty for the shove, although the chances of Earls actually scoring a try were 50-50 at best. What I can't understand is how the TMO ruled out foul play, despite viewing the incident several times? Chris

Hi Chris, not giving the penalty is a mystery to me as well. I can only think the TMO believed it was a fair challenge by Debaty.

Hi Jerry, who's been the most underrated player of the tournament so far? Hindsight

Hi Hindsight, if I look at consistency then I feel Mike Brown has done the job asked of him by England. Wales prop Adam Jones has recaptured his best scrummaging form and Greig Laidlaw and Kelly Brown have been consistently good for Scotland.

Flanker Peter O'Mahony has been relentless in his work rate for Ireland and Alessandro Zanni and Andrea Masi have worked their socks off for Italy. I'm sorry, I can't think of a Frenchman… My most underrated player of the tournament would be O'Mahony.

Hi Jerry, with Australia flanker David Pocock out of the picture because of injury, does Chris Robshaw become a more viable option at open-side for the Lions now, as Australia's impact at the breakdown will be substantially weaker?

Or do you think Warren Gatland will stick to his word in wanting to select an out-and-out seven in the likes of Sam Warburton, especially after his man-of-the-match display against Scotland? SionM

Hi SionM, the Wales v England match will go a long way in telling us who should be the Lions seven. There's little doubt that both will go to Oz and the fight will continue throughout the tour as to who will get the Lions open-side berth.

Warburton had a great game against Scotland and Robshaw did his usual ton of work in the game against Italy. If Pocock isn't fit for Australia, Michael Hooper will replace him and he's the same type of player as Pocock. Robshaw played against Hooper last autumn and didn't really outplay the Aussie.

Warburton at his best against Robshaw at his best is still a tough call. A year ago I would have quickly said Warburton but we've seen a different side to him over the last 12 months. However, you get the feeling if Warburton is fully fit, then his out-and -out instinct at seven puts him slightly ahead of Robshaw.

I know the weather at times hasn't helped, but why have all the Six Nations suddenly become afraid to play open, attacking rugby? There seems to be a mind-set of focusing on defence and being afraid of losing. It's not the first time in the past few years this has been the case with northern hemisphere rugby.

Why do you think there has there been very little exciting attacking rugby since the opening four matches? Kyle P

You are right, the weather hasn't helped, but missing golden opportunities has also been a factor. The biggest factor must be that defences are getting better, not just first-up defence but the scramble defence (once the first line of defence has been breached) as well.

Not all teams have the skill set of New Zealand, which generally enables them to score a decent number of tries per game. They have a different mind-set, and combined with that skill set and fitness they have, that separates them from the rest.