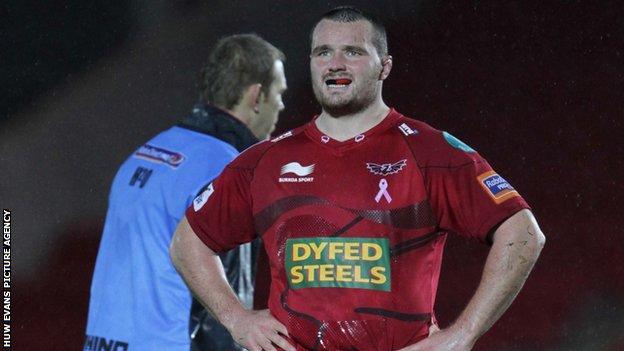 Scarlets and Wales hooker Ken Owens has extended his contract to stay at Parc y Scarlets until 2016.

The 26-year-old will be the Scarlets first-choice hooker next season with Matthew Rees' departure to the Cardiff Blues in the summer.

Owens, who joined the Scarlets in 2004, has been capped 14-times by Wales.

"I look forward to pushing on with my ambitions at both regional and international level by continuing to play my rugby in Wales," said Owens.

Owens, who has appeared 135 times in a Scarlets shirt with 25 points to his name, is a product of the Scarlets development system which has produced Rhys Priestland, Jonathan Davies and Scott Williams.

"I'm delighted to be staying at the Scarlets - the region that I grew up in, where I feel at home and that has fully supported my rugby career to date," said Owens.

"We have a great team ethic at Parc y Scarlets, the boys all work hard for each other and because so many of the players have grown-up together in rugby we're a close-knit group.

"There's a strong spirit in this team and the players in West Wales know what it means to wear the Scarlets shirt and have a strong sense of community, given our great heritage.

"There is plenty to look forward to and I am pleased to be committed to Scarlets rugby now as competition and some depth in key positions builds in our squad.

"The boys have done well in recent weeks to keep us in the top four of the RaboDirect PRO12 and thanks to their hard work we have an exciting finish to the league season when we return to Parc y Scarlets.

"We have a first-class rugby environment at Parc y Scarlets to train and play at and I'm just happy to be staying and grateful to all the Scarlets coaches I've worked with for the opportunities and support I have been given to date."

Owens was first drafted into the international set-up when he was called in to the 2010 Six Nations squad and he was a member of the 2011 Rugby World Cup squad. He made his debut for Wales on 26 September 2011 against Namibia as a second half replacement.

His first start for Wales came in the 2012 Six Nations Championships against England at Twickenham, in which Wales secured the Triple Crown, on their way to the Grand Slam.

Owens' decision to stay is a major boost following young fly-half Owen Williams' decision to leave Parc Y Scarlets for the Leicester Tigers in the summer.