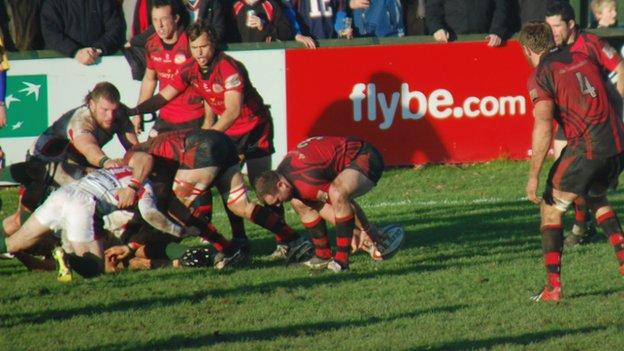 Jersey coach Ben Harvey was pleased to secure a first away win at Plymouth on Saturday but was frustrated his side let the match get so close.

Jersey scored twice at the start of the second half before a late onslaught from Plymouth left the visitors clinging on to win 19-15.

"We scored two good tries but then started to get tense and slip back into bad habits," he told BBC Radio Jersey.

The lads know there was a real chance to get a bonus point today and that could be the difference between staying up or going down.

"The boys stood firm though and it's great to get our first away win."

He continued: "The pleasing thing is the players are thinking like me, they're frustrated and are striving to get better. They're thinking 'that could've been so much better'.

"Still, that's our first ever double in the Championship and it is enormously important at this stage of the season to be five points clear of the relegation zone."

Meanwhile Jersey's top try-scorer Guy Thompson took his tally to five for the season on Saturday.

The back-rower went over in the first-half after a Paul Roberts penalty had given Plymouth an early lead.

"We're delighted to win but there's a lot of improving to do," Thompson said.

"The lads know there was a real chance to get a bonus point today and that could be the difference between staying up or going down.

"We held firm though and a lot of credit has to go to [defence coach] Steve Boden with the work he's put in with us, it really came through in the final stages."