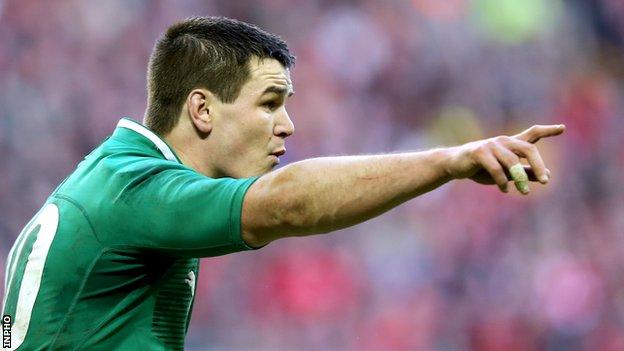 Fly-half Jonathan Sexton will miss Ireland's Six Nations match against Italy after sustaining a foot injury during training on Thursday.

Sexton had originally been named in the starting team but just two hours after the team announcement it was revealed the Leinster man had been ruled out.

Ulster's Paddy Jackson, who deputised at number 10 against Scotland and France, will now start in Rome.

Ian Madigan, who made his debut against France, continues as a replacement.

Sexton's withdrawal is the latest in a long series of injuries Ireland coach Declan Kidney has had to contend with.

Kidney, whose future as coach is a matter of much speculation in the Irish media with his contract soon to expire, had referred to the latest Sexton injury when naming his selection at the team hotel in Dublin on Thursday.

He (Brian O'Driscoll) is playing as good as he's ever played

However, at that stage it seemed Sexton's injury was merely a minor concern and that Madigan would be travelling as a precaution.

"Jonny turned over on his foot a little bit this morning, but we expect that he will be fine," Kidney told a media conference.

But before Ireland flew out to Rome, it was announced that first choice fly-half Sexton would be missing.

Sexton had missed the games against Scotland and France because of a hamstring injury.

Elsewhere on the Ireland team, winger Craig Gilroy returns from injury as the Irish aim to end a disappointing Championship on a high.

Brian O'Driscoll has been passed for fit what could be his last Six Nations match while fellow centre Luke Marshall has also recovered from a knock.

O'Driscoll, who suffered a torn ear which needed eight stitches, a knock to the head and a dead leg against France and still finished, was declared 100 percent fit by Kidney.

"Please God, it won't be (his last game for Ireland). He's got himself right, he's playing as good as he's ever played," added the Ireland coach.

There is a change among the replacements with Devin Toner coming into the match squad in place of Donncha O'Callaghan.

Fergus McFadden and Eoin Reddan had earlier been ruled out of the Rome game.

Reddan was Ireland's most serious casualty from Saturday's 13-13 draw against France after sustaining a broken leg, so Ulster scrum-half Paul Marshall takes over as replacement number nine.

Gilroy returns on the wing after overcoming the injury he suffered in the defeat by the Scots at Murrayfield, replacing McFadden who sustained rib damage in the clash with France last week.

The pack is unchanged from the eight that started against France with lock Donnacha Ryan being given a clean bill of health after taking a bang on his shoulder last Saturday.

Conor Murray (knee) and Peter O'Mahony (dead leg) picked up knocks in Saturday's 13-13 draw but are playing this weekend.

Ireland's Six Nations campaign has been beset by injuries with regular starters Paul O'Connell, Tommy Bowe and Stephen Ferris ruled out before the start of the tournament along with Leinster hooker Richardt Strauss.

And an exceptionally tough season has also seen Simon Zebo, Gordon D'Arcy, Chris Henry, Gilroy and Sexton sustaining injuries while Cian Healy was suspended for the defeat in Scotland.

In addition, back-up players such as Darren Cave, Paddy Wallace and Dave McSharry have also been unavailable for much of the campaign.

Replacement Reddan fell awkwardly beneath a tackle in the final minute of Saturday's compelling clash and was given oxygen before being carried off.

Italy's hugely impressive display in Sunday's 18-11 defeat by England at Twickenham suggests that the Irish will face a difficult task to maintain their record of never having lost to the Azzurri in the Six Nations.

Victory in Rome, combined with France dispatching Scotland in Paris, would secure a third-place finish for Ireland - a reasonable return given the injuries they have endured.

But defeat, combined with a French win, would thrust them into contention for the wooden spoon.