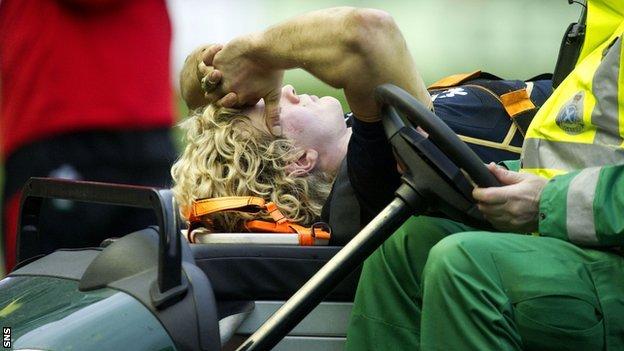 Scotland lock Richie Gray may play again this season after a scan on his injured hamstring revealed a tear that should take about two months to heal.

The Sale Sharks second row was carried off during ruling him out of Saturday's tie with France.

Scotland doctor James Robson said the scan confirmed the presence of a "grade two tear" of a hamstring muscle.

"The normal period of rehabilitation is in the region of eight weeks," he said.

"We have kept his club medical team at Sale Sharks fully appraised of Richie's situation and will now commence his recovery with his club with a view to playing before the end of the season."

Sale's last match of the Premiership season is in eight weeks, on 4 May, leaving Gray facing a struggle to prove his fitness if he is to be considered for the Lions tour of Australia.

Head coach Warren Gatland will name his squad in seven weeks, at the end of April, with the party scheduled to leave in 11 weeks, on Monday 27 May.

Gray, 23, won the first of his 31 Scotland caps in 2010, coming on as a replacement in a Six Nations match against France at Murrayfield.