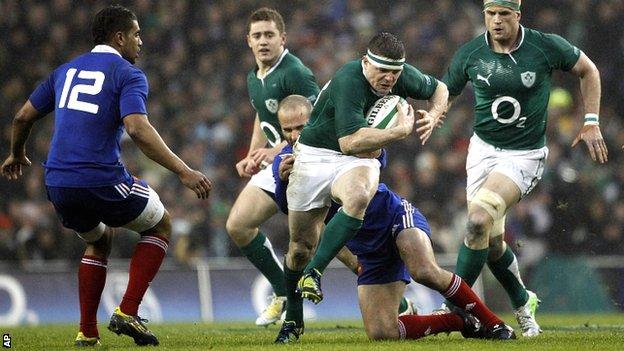 If it was Brian O'Driscoll's final appearance for Ireland in Dublin then it wasn't as he would have written it.

A grim, attritional struggle in the mud and the blood and the tears was not the ideal stage for this prince of centres to display his sublime attacking skills, while a second-half comeback by the French provided a less than happy ending.

Give O'Driscoll a stage and he will play it any way you want it. The Dublin faithful will not see his like again

But O'Driscoll has never allowed himself to be typecast and the sight of him rummaging at the breakdown, winning turnovers and generally making a nuisance of himself was every bit as emblematic of his long and illustrious career as any searing break or conjuror's offload.

As was his re-entry into the fray, having left the field because of a knock to his leg and a cut ear with 10 minutes remaining. With France looking the most likely to nick a victory as the game entered its final, desperate act it was a stirring act of defiance: I may be hobbled, I may be bloodied, but you'll win this over my dead body.

As a lesson to Declan Kidney's less experienced recruits, it was invaluable. But it was also a stark reminder of how much Ireland will miss O'Driscoll when he is gone. The Leinster man has been at the heart of everything that has been good about Irish rugby over the last decade and a half and is impossible to replace.

Even Kidney had to laugh as he ran through his injury list. And while pundits will no doubt chastise Ireland for allowing France back in the game, Kidney was keen to point out that, as far as he was concerned, two defeats, one win and one draw from this year's Six Nations was not such a disastrous return given the number of Irish casualties picked up along the way.

Replacement scrum-half Eoin Reddan broke his leg at the death and will be out for three months. "Everybody else is pretty good," said Kidney.

Still, Ireland are making a habit of winning the statistical battles and not winning the war at the end of it. A fortnight ago, Ireland trounced Scotland on paper but were somehow beaten. Against France, too, Ireland got the better of territory and possession but were unable to seal the deal.

In the first half, Ireland's tactics were almost perfect: playing to the conditions and keeping things tight, their driving maul was devastating, while Paddy Jackson's tactical kicking was generally spot-on. Jackson's selection ahead of Ronan O'Gara for Ireland's last two games has caused much debate, especially given that he who was so wasteful off the tee against Scotland. But the Ulster fly-half landed a couple of difficult penalties, proving he is a quick learner.

It was early in the second half that Ireland failed to kill off the match. Starting where they left off in the first, they should have scored points after a period of sustained pressure but Rob Kearney's missed drop-goal attempt, after Jackson had declined, swung the game in France's direction.

Toulouse number eight Louis Picamoles was immense and instrumental in chiselling his side back into the game. Picamoles made 83 metres in all, more than twice as far as Ireland's best ball-carrier, Sean O'Brien with 36. Minutes after scoring the try that Frederic Michalak converted to square the scores, Picamoles was at the other end, beating Ireland winger Keith Earls to a touch-down that would have won the game for the hosts.

How Picamoles failed to win the man-of-the-match award is anybody's guess. Certainly, there is currently no better number eight playing the game.

While there were other stand-out performances from French players - skipper Thierry Dusautoir was magnificent in defence - on the whole Philippe Saint-Andre's side were insipid for three-quarters of the game. It is sad to see a French side so lacking in attacking ideas and Saint-Andre's decision to pick Michalak ahead of Francois Trinh-Duc was symptomatic of a man suffering with a destructive combination of amnesia and confusion.

When Trinh-Duc replaced Michalak in the starting line-up against England, France looked to have rediscovered a semblance of cohesion. Until Michalak was introduced for the final quarter, when France went to pieces again. Remarkably, given the flakiness of Michalak's performance, Trinh-Duc didn't get any game time against Ireland. Saint-Andre must really hate him.

It was the French bench that ultimately made the difference, the blue-shirted cavalry pounding away at an exhausted Irish team in the final 20 minutes. With Ireland's replacements largely forced because of injuries, their pack was out on its feet.

So Kidney is right to laugh wryly rather than beat himself up over a win that got away. Saint-Andre, meanwhile, looks like a dead man walking. You would expect France to beat Scotland in Paris next weekend to avoid the wooden spoon. But avoiding wooden spoons is not what French sides are supposed to do.

It was by no means a classic between Ireland and France on Saturday. But it was a day O'Driscoll proved he is the Daniel Day-Lewis of rugby: never anything but fully immersed in his role, give O'Driscoll a stage and he will play it any way you want it. The Dublin faithful will not see his like again.