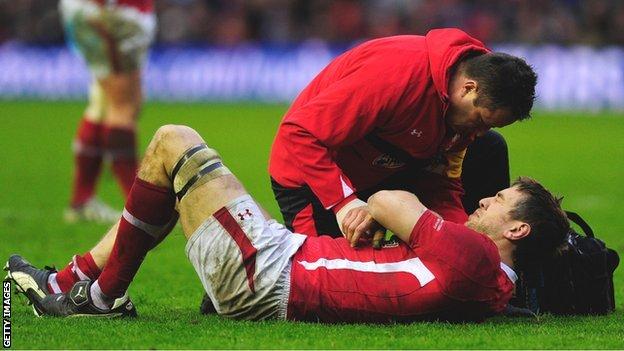 Wales captain Ryan Jones has been ruled out of the Six Nations title decider against England in Cardiff on Saturday.

The back-row, who turns 32 this week, was forced off in the 48th minute at Murrayfield after injuring his shoulder in Wales' 28-18 win over Scotland.

Justin Tipuric, Andrew Coombs and Aaron Shingler are options to start in the back-row against England.

"It looks as though he [Jones] will be out for six to eight weeks," said Wales assistant coach Robin McBryde.

"He has broken a bone in his shoulder and he is now under the management of the Ospreys."

As players who have been versatile enough to play in the second and back-rows, Newport Gwent Dragon Coombs and Scarlet Shingler are like-for-like options to take over from versatile Jones at blind-side.

Cardiff Blue Warburton could also join Tipuric in a re-formed Wales break-away trio with the former starting at six.

Andrew Coombs is very accurate at the breakdown, both in attack and defence and he's got that physicality about him as well

"You've got Aaron Shingler, James King, Andrew Coombs as well to fall back upon so we're blessed we've got quality players in the back-row," said McBryde.

Coombs, 28, was uncapped ahead of the tournament and has earned plaudits for his displays against Ireland, France and Italy, the latter game in which Alun Wyn Jones returned from injury as a replacement for the Dragon.

McBryde said of Coombs: "He's played a lot of his rugby at six.

"He's played recently a lot more at second-row, but I think he's shown enough, definitely at regional level, but at international level as well with regards to how effective he can be with ball in hand and he's got great footwork [and] good off-loading ability.

"He's very accurate at the breakdown, both in attack and defence and he's got that physicality about him as well so he could well be an option for us at six."

Warburton, whom Jones replaced as captain against France, took over as skipper against Scotland and moved to the blind-side role to accommodate Osprey Tipuric's introduction.

But former Wales flanker Martyn Williams suggested lock Alun Wyn Jones should take over as captain if Jones was not fit to face England, to take the pressure off Warburton.

The win at Murrayfield was a record fifth successive away success in the Six Nations for Wales.

That victory set up a mouth-watering clash at the Millennium Stadium on 16 March against England, who will be going for the Grand Slam after at Twickenham on Sunday.

But defending Six Nations champions Wales will retain the title if they beat England by eight points, and could do so with a seven-point win.