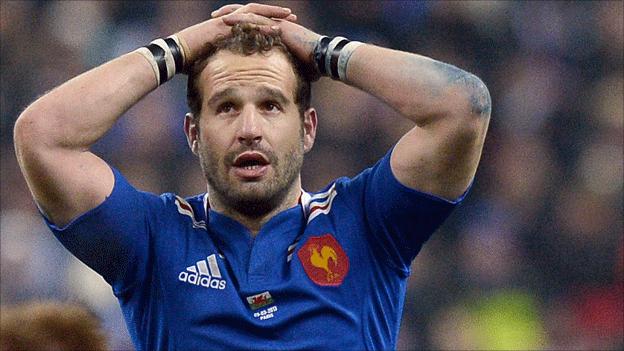 France coach Philippe Saint-Andre has recalled fly-half Frederic Michalak to face Ireland in one of three changes to the starting XV which lost to England.

Wing Maxime Medard returns in place of Benjamin Fall, who is dropped from the squad, but the forwards are unchanged.

After defeats to Italy, Wales and England, France are bidding to regain some pride in their remaining matches.

They face the Irish in Dublin on Saturday, and then entertain Scotland in the concluding game of the Six Nations in Paris a week later.

Michalak and Morgan Parra will become the third half-back partnership the French have deployed in this year's championship.

Michalak, singled out for his poor performances during the defeats to Italy and Wales, was relegated to the replacements bench at Twickenham and came on in the 53rd minute, but made little impact.

Saint-Andre, however, said he wanted to keep faith with the player, telling reporters on Thursday: "Frederic has regained his freshness and has been very good in training."

Medard's return to the side was expected, nearly a year after his last Test for France, when he tore cruciate ligaments in his right knee against Scotland.

Saint-Andre said he would play on the left, working with full-back Yoann Huget, who has impressed this year, to give France more attacking options.

"(Medard) will alternate between the wing and the back with Huget," the coach said, adding that he was expecting a lot of high balls from the Irish.

Hooker Guilhem Guirado and giant lock Sebastien Vahaamahina come onto the bench, with Dimitri Szarzewski and Jocelino Suta dropping out. Trinh-Duc and Bastareaud are also among the replacements.

France are rooted to the bottom of the table in their worst start to the tournament since 1982 and are in danger of landing their first Wooden Spoon since 1957.

'Les Bleus', however, have the psychological advantage of knowing that they have only lost once to the Irish in their last 13 Tests - Ireland's Grand Slam victory in 2009.

"The French team's role is to win and win well but in our situation, we'd take a 3-0 victory," Saint-Andre added.

"You've got to make your own luck. We didn't face up to the situation in the first three matches.

"We've got to score when we're playing well, concede fewer points when we're not (and) be better defensively.

"Against England, when we scored, we weren't aggressive enough in the first line of defence. We missed a lot of first tackles.

"We've worked on that to be tighter against Ireland. We've got to learn to win matches again."