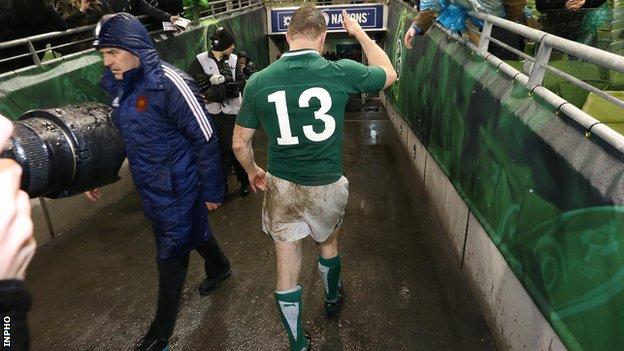 The former skipper had hinted that this could be his last Championship and the Irish complete the campaign away to Italy next Saturday.

"It is a decision for Brian obviously, but I am hoping it won't be his last as he is such a huge asset," said Kidney.

O'Driscoll was given a huge ovation by the crowd at the Aviva Stadium.

But there was disappointment that the Irish could not secure a much-needed victory, having held a 13-3 lead.

"It is frustrating we did not manage to close out the deal," said the Ireland coach.

"It was the type of game where chances were at a premium and it is all about taking chances.

"These games can be decided on tiny margins."

Kidney was asked about the decision not to award Ireland a potential match-winning penalty late on after winger Keith Earls was eased out of his chase for a try in the right-hand corner by France replacement Vincent Debaty.

Referee Steve Walsh referred the decision to the video official, but it was decided there was no foul play.

"The TMO was asked try or no try - obviously it was not," said Kidney.

"But the question of foul play seemed to be taken out of his hands."

On the same incident, Ireland skipper Jamie Heaslip said: "From what I saw, Keith got bumped a bit but they went upstairs, the video referee called it as he did and you have to get on with it."

Heaslip, who scored Ireland's try in the first half, had no complaints about the drawn outcome.

"It probably was not the prettiest game to watch but I think the score reflected the game," said the number eight.

"There was not much between the teams but they came back strongly in the last 20 minutes. It was a very tough game."