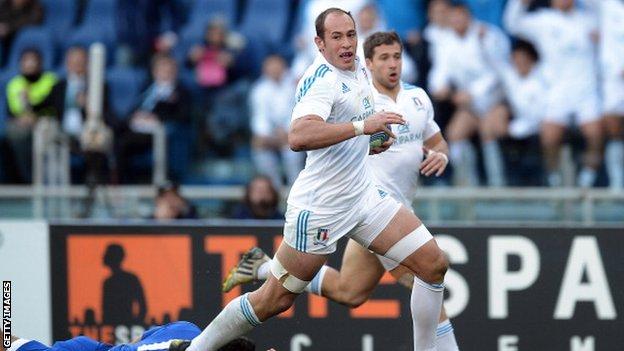 Italy captain Sergio Parisse can play against England in Sunday's Six Nations match after his 30-day suspension was reduced by 10 days following an appeal.

Parisse, 29, was banned after being sent off for insulting a referee during a Top 14 match last month.

Sergio Parisse became the youngest number eight in international history when, in 2002, he made his debut as an 18-year-old against New Zealand in Hamilton.

"He is now banned until Saturday," said an Italian federation spokesman.

The return of the number eight, winner of 93 caps and scorer of the first try in Italy's shock win over France, will be a huge boost for the Italians.

He was sent off after 36 minutes of Stade de France's Top 14 match with Bordeaux-Begles and was initially banned for 40 days, with 10 of those suspended.

Parisse, who was absent during Italy's 26-6 defeat by Wales in their last game, had been expected to miss the final three matches of the tournament.

But the influential Azzurri skipper has been cleared to play against both Grand Slam-chasing England at Twickenham, and then Ireland on the final weekend, following a successful appeal to the French Rugby Federation.

His charge was reduced from 'insulting a referee' to 'failing in his captain's duties'. As well as a 20-day ban, he was also given community service to perform.

"Sergio is an important element for this group, and we could not be happier to be able to make (him) available to the (head coach) Jacques Brunel for matches against England and Ireland," said Italy team manager Luigi Troiani.

Meanwhile, Parisse and prop Martin Castrogiovanni, who replaced Parisse as captain against Wales, will be in the Barbarians squad to face England, at Twickenham on 26 May, and the British and Irish Lions on the first match of their tour in Hong Kong on 1 June.