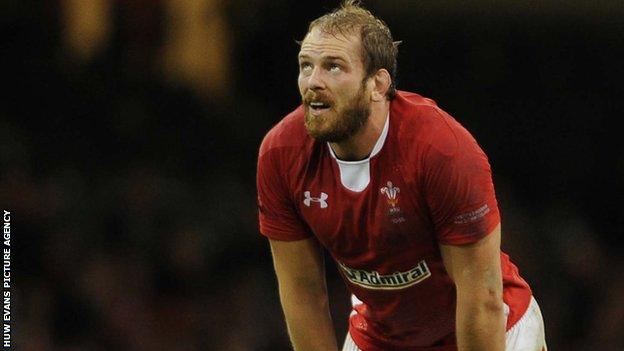 Recalled lock Alun Wyn Jones is under no illusions he must perform against Scotland to keep his place in the Wales side.

Interim coach Robert Howley has brought in the British and Irish Lions player in place of Andrew Coombs.

Rookie Coombs has been Wales' top line-out catcher so far and the fourth-best jumper in the championship.

Jones, capped 68 times, came off the bench during Wales' 29-6 win over Italy having recovered from the shoulder injury that kept him out of the opening two rounds.

The injury, and the absence of Luke Charteris and Bradley Davies, forced Wales to give Coombs his debut against Ireland, but the Dragons man has proved to be a capable replacement.

"He has been doing a great job for the Dragons," said Jones. "He has come here to do a similar job and stood up to the mark.

"In fairness to Andrew he was the first one to congratulate me on selection in the team. It's not a nice place to be but ultimately you have to be happy for yourself and move forward."

Osprey Jones has returned to full fitness after a three-month injury lay-off which saw Wales suffer a second-row injury crisis, with him, Perpignan's Charteris and Davies of Cardiff Blues all sidelined through injury.

Coach Howley selected only one recognised international lock in the shape of Evans and was forced to draft the inexperienced trio of Lou Reed (Blues), James King (Ospreys) and Olly Kohn (Harlequins) into his Six Nations squad.

"Hopefully, it won't happen next year. It's never nice to have time away from the game, but I possibly needed it and hopefully, I'm ready to go.

"It's not an ideal place to be when you're injured at the start of the tournament.

"But the boys who have stepped into the jersey have far exceeded the expectations of what people would have thought.

"I did everything I could to put myself in this position to be selected."