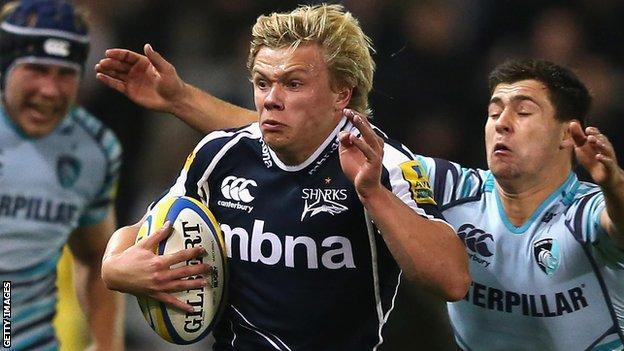 Nathan Fowles' try 14 minutes from time sent Sale to the Anglo-Welsh Cup final for the first time since 2004.

Fowles came off the bench to win it as Sale forgot their league struggles to book a meeting with Harlequins.

Four Ben Spencer penalties and two from Danny Cipriani had put Saracens 12-6 up before Tom Holmes went over after a scrappy line-out just before half time.

Spencer then added another penalty before Fowles' try, Cipriani rounding off victory with a late penalty.

That meant a double cause of celebration for Sale, who moved off the bottom of the Premiership on Friday after London Welsh's five-point deduction.

"What's happened with London Welsh is good fortune for us in one respect, but we just need to compound it by winning the remainder of our games.

"We've got three league games at home, London Irish and Northampton away and we need to go in and finish in the Premiership on our own merits.

"But the LV= Cup is good to keep the momentum. Harlequins are obviously throwing it about and we're looking to play, so it will bode well for a good game down at Worcester."

"We rotate and the guys that started the game got us into the LV= Cup semi-final.

"This was their reward for getting that achievement.

"I think it was only right that they started the game."