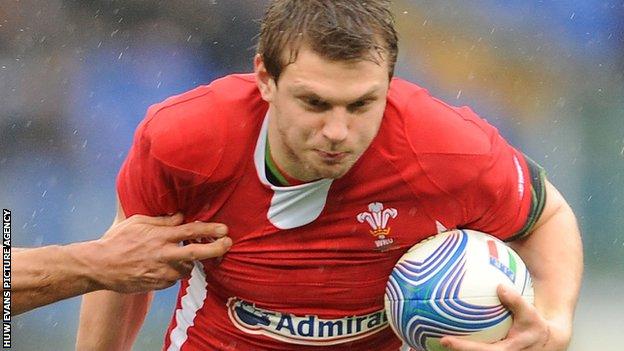 Wales need to beat the Scots to set up a Championship decider against Grand Slam-chasing England in Cardiff.

"It's important we don't take our eye off Scotland," said the Ospreys player.

"If we don't win this weekend, it won't matter for next weekend. We can't take anything for granted."

And Biggar added: "We need to put in a good performance otherwise next weekend will be very irrelevant."

Both Scotland and Wales go into the Murrayfield clash with two wins apiece.

"He was always very straight with me [at the Ospreys]. He is a good man-manager. He was very good to me. Very loyal.

"He is a great, great coach. Scotland will be well organised and well coached.

"Johno is not everybody's cup of tea but he was very good to me and it will be good to catch up with him.

"What also needs to be said is that: Johno is not playing on Saturday. There are 23 Scottish players to worry about rather than Johno."

Wales have two away successes over France and Italy while the Scots beat Italy and Ireland.

And Biggar believes that playing away from home has helped Wales after starting the championship by losing to Ireland - their eighth straight defeat.

"Everyone knows it's a goldfish bowl here in Wales and after the poor performance [against Ireland] it was nice to get out of [Wales]," he said.

"It's difficult when you are in Wales when things aren't going 100% well.

"The last couple of weeks has been away from the spotlight. We have gone about business quietly and got the wins under the radar.

"[There was] no pressure on us going to the Stade de France. [We] managed to pick up a result there.

"But now it's turned into pressure on us again. We have got a sniff of the title."

With Scarlet Rhys Priestland ruled out of the Six Nations with an Achilles tendon injury Biggar has been the first choice for Wales' campaign.

After having a kick charged down to help Ireland win the opening encounter, the fly-half has seen a gradual improvement in his performances in Paris and Rome.

"It's been steady progress - it hasn't been anything flash," he said.

"But it's what has been required the last two weekends out in Rome and Paris. It was important just to get back to winning ways and my kicking has just managed to settle things down a bit.

"I've done nothing flash, nothing extravagant. I've managed to do the basics relatively well and build on what was probably a shaky start against Ireland."