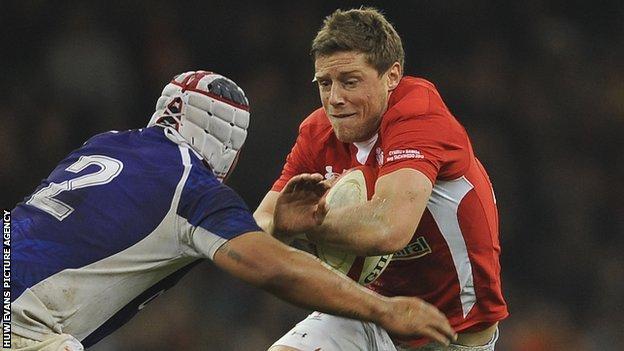 Wales fly-half Rhys Priestland says he reached such a low point that he was reluctant to take to the rugby field.

The 26-year-old is currently recovering from a ruptured Achilles tendon.

But Priestland told BBC Radio Wales' The Back Page that before that he was suffering a crisis of confidence during Wales' winless autumn Test campaign.

"I wasn't really enjoying rugby, especially at the start of the autumn internationals I didn't really want to be on the field," Priestland said.

"After the Samoa game was probably my lowest point. I remember speaking to [Wales interim head coach] Rob Howley and... I said, 'I'm not happy, I'm not looking forward to going on the field'.

"I'm going on the field and I just don't want to make mistakes and I've never played like that.

"I found it quite tough and off the field things weren't going that well for me.

"I remember him [Howley] asking me, 'Do you want to play against the All Blacks?' and I couldn't answer him straight away, and I couldn't believe that I had to think about things like that."

The fly-half bore the brunt of the criticism for Wales' lack of creativity during the autumn series, and has admitted to seeking the help of a sports psychologist after losing confidence.

"After the Samoa game I saw Andy McCann, who's the sports psychologist with the squad, and from the first time I met him it was such a weight off my shoulders, just nice to speak to somebody," he added.

"I'm not the sort of person who can easily ask for help, so just being able to speak to somebody and put things in perspective helped me a lot.

"I thought I turned things around quite well from the first two games to the second two games and I was really happy with the way things were going. Then obviously my injury happened but it's just one of those things."

But while the injury has wrecked the fly-half's season and probably ended his hopes of being selected for the British and Irish Lions squad to tour Australia next June, Priestland believes it could benefit him in the long term.

"I think my body was crying out for a break; my shoulder was sore, my back was sore, my knees were sore," he added.

"Obviously I didn't want to rupture my Achilles but I've had this break now and it's given me the chance to sort the rest of my body out, it could be a blessing in disguise.

"Because I haven't got much rugby commitments now I can concentrate on the aspects I need to sort out. I'm enjoying it to be honest.

"I'm probably about halfway now, so hopefully back the start of April but who knows?

"Rupturing your Achilles isn't what it used to be, you used to be out for six to nine months but now it's four or five months.

"Every day I come in it's improving and I can see the step by steps I need to take to get it better and I'm quite enjoying it, to be honest."

Dan Biggar has taken the Wales number 10 shirt in Priestland's absence and after an opening home loss to Ireland in the Six Nations, Wales ended an eight-match losing streak by beating France in Paris.

Wales' next test is a trip to play Italy on 23 February.

*Listen to the The Back Page on Saturday mornings from 08:30 GMT on BBC Radio Wales.