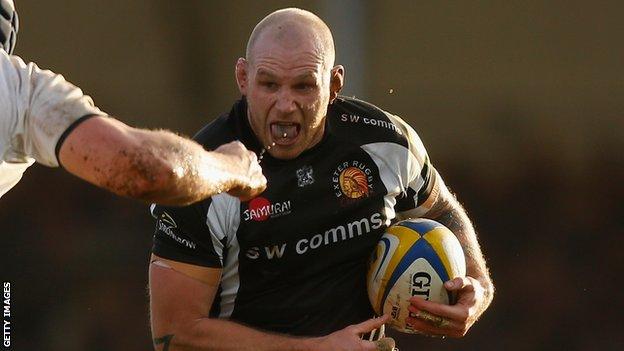 Flanker Scaysbrook, 31, has extended his stay at Exeter for two years, while 23-year-old hooker Yeandle has signed a deal until the summer of 2014.

"I'm really pleased so have sorted my future at the club.

He has scored six tries in 97 appearances for the club since moving from Bath in 2009.

"It's nice when you keep the squad together and keep building it and it's definitely a club that's building for the future.

"Moving to the Heineken Cup this year has been a big step up for us and it's nice to be playing at the higher level," he told BBC South West Sport.

"Scays has been one of the fundamental parts of why we've done so well in the Premiership," said Exeter head coach Rob Baxter.

"He's worked very hard for the club and put his body on the line and I think it's great for us that he wants to stay.

Yeandle, meanwhile, and has also

He made his Chiefs debut in the LV= Cup in November and has been used as a replacement in the Premiership and Heineken Cup.

"The biggest compliment I can pay Jack is that I watch him train and I watch him around the club and he's someone I want to see do very well," said Baxter.

"He works very hard and has had to be patient and wait for game time and he's been a great character around the place. He's been exemplary in his attitude and I've enjoyed watching him develop.

"For me, I hope he's a player who stay at Exeter for 10 years and if his attitude is right I can see him going a long way."