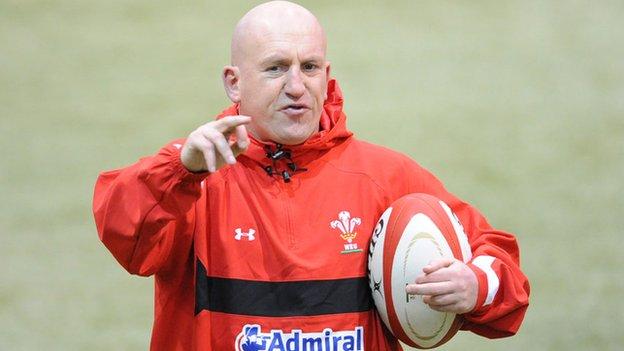 Wales defence coach Shaun Edwards has dismissed criticism of his tactics following the defeat against Ireland.

Former Wales second row Gareth Llewellyn questioned the effectiveness of Wales' "blitz" defence during the 22-30 loss in Cardiff on Saturday.

But Edwards says the team's problems in their Six Nations opener happened when they did not employ the tactic.

"I was happy with the blitz defence, but I wasn't happy when we didn't blitz," he said.

"You notice from the scrum try we didn't blitz, you know people are saying the blitz defence is not working.

In a blitz, the defenders speed towards the attacking formation as the ball emerges from a ruck or maul, with a player positioned close to the point from which the ball has emerged leading the line of would-be tacklers.

Its aim is to halt an attack before reaching the gainline and is viewed by some involved in the sport as 'high risk, high reward' because of potential space left behind the defenders that attacking teams could exploit.

"The blitz defence works. We just need to do it at the right time."

The tactic sees defenders moving forwards towards their attackers, with the aim of closing down space quickly and preventing the opposition gaining any ground.

Wales have prospered using the tactic, conceding only three tries in last year's Six Nations championship on their way to a Grand Slam.

But Llewellyn, who won 92 caps, believes it has deficiencies and claimed Wales' last-minute 12-14 defeat against Australia in December was the result of a team successfully countering the blitz defence.

"We lost to Australia in the autumn because we blitzed at the wrong time and if we hadn't have blitzed in the last minute of the game they wouldn't have got outside us, we wouldn't have lost the match." he said.

But former rugby league international Edwards claimed: "It didn't work because we didn't blitz, the left winger didn't blitz on that occasion."

Edwards admitted that the Welsh players would be under pressure against France in Paris on Saturday.

Wales have lost eight consecutive Test matches, a run stretching back to June 2012.

"Every player is two bad games away from being in jeopardy," added Edwards.