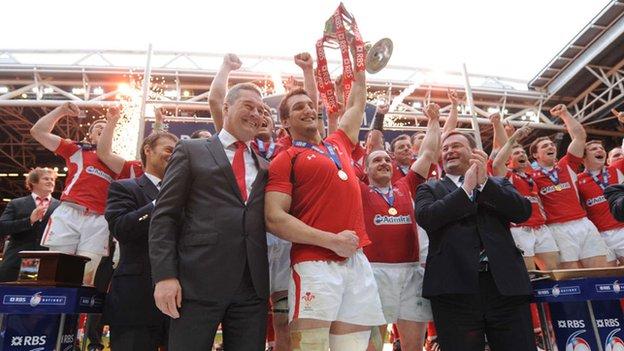 Gwyn Jones says Wales can use criticism of their autumn whitewash to help them beat Ireland in the Six Nations.

Wales lost at home against Argentina, Samoa, New Zealand and Australia during November and December.

They start their defence of the title against Ireland, with former Wales captain Jones saying the players have been stung by media reaction.

"It would have hit them hard, but you can use that as motivation to drive yourself forward," he told Sport Wales.

"You know most people have Ireland down as favourites. I don't, and I think that Wales can prove everyone wrong."

Jones says the negative reaction from the Welsh media and public after the autumn matches was a shock for some of the players.

"For some of them, perhaps the newer ones, it's the first time they've had that kind of public criticism on their backs," Jones added.

"They've been justly eulogised since they've come into the side and it's hard.

"It changes your mindset towards the media, you become stand off-ish, even when you get the praise you take that with less enthusiasm.

"So it would have hit them hard."

Wales under Warren Gatland reached the semi-final of the Rugby World Cup in 2011, followed in 2012 by their third Six Nations Grand Slam in eight years.

But a run of seven consecutive defeats have dented the optimism of the usually upbeat Welsh rugby public.

"For once, expectations aren't as high as they usually are," said Jones

"Regional rugby is on its knees effectively, really poor in Europe. Injuries have blighted the side and so I think for once perhaps expectation isn't as high.

"[But] you know they've got to the semi-finals of the World Cup, they're the Grand Slam champions and so when you take that into account we should be expecting a reasonable performance."