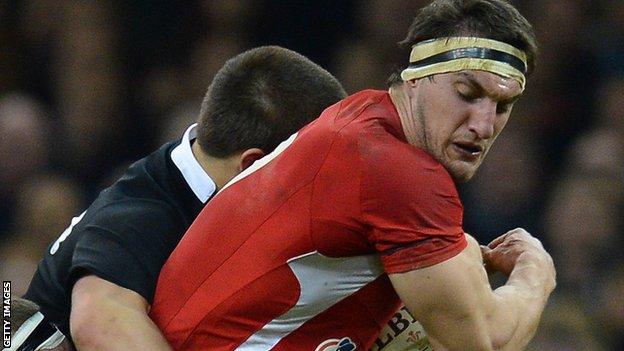 Wales enter the championship on the back of seven straight defeats and none of the regions reached the Heineken Cup knockout stages.

Wales have not won since beating the Barbarians 30-21 in June.

"[We are] Grand Slam champions and that's how we are going to approach the campaign," said Warburton.

The Cardiff Blues open-side flanker understands that there is a depressed air about Welsh rugby but insists that it has not entered the Wales camp, despite four defeats to Australia and reversals against Argentina, Samoa and New Zealand.

"It's understandable that people are looking that way at Welsh rugby," he admitted.

"But quite a few times I have come into campaigns and people don't expect us to do very well last year.

"I don't think they expected us to beat Ireland in the first game [last year]. Until that first weekend of rugby it's very hard to predict what happens.

"But I'm always the optimist, very positive, as are all the coaches. I think most of the players are the same as well.

"When you come into the Welsh environment it just feels like it's a new start. You put whatever has happened in the past behind you and you start again from fresh."

Warburton knows that the result against Ireland is crucial in determining the rest of the campaign especially as, after Saturday, Wales face three consecutive away games against France, Italy and Scotland.

"When you do win week in, week out like last year the momentum is massive and you just turn up to training the next week that much happier, less pressure, and training becomes that much easier.

"Whereas if you lose then suddenly three away games, it's an uphill battle really.

"So that first game every team will put a big emphasis on winning that. It's a big pressure game."

Despite his optimism about Wales, Warburton revealed he had not been confident of where he was going to play for Wales against Ireland.

"I wasn't entirely sure myself... so I was learning roles at six and seven, making sure I knew the eight role just in case.

"But I've been picked at seven where I'm most comfortable and I'm happy to be playing there this Saturday."

There had been speculation that Wales would pick two open-sides in Warburton and Justin Tipuric to fill the six and seven shirts, but instead interim coach Rob Howley has gone with the 6ft 5in Aaron Shingler at blind-side to boost the line-out options.

"Our speed of ball is so important and our back row has a massive influence on that."

"They have a very strong set-piece. I think they will come at us at the line-out.

"The line-out is going to be a big aspect of the game and hopefully one which we can dominate in,

"The battle of the breakdown and line-out will be very important."