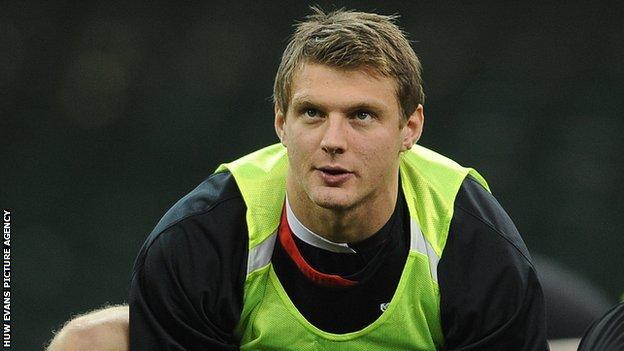 Interim Wales coach Robert Howley has pleaded for the nation's media and pundits to "please keep the pressure off" fly-half Dan Biggar.

The Osprey won Howley's backing to start at 10 in their Six Nations opener against Ireland on Saturday, preferred to Perpignan's James Hook.

Howley told the media: "It's important that he gets an opportunity and please can you keep the pressure off him."

However, Howley also said there are "questions that Dan has to answer".

Biggar, 23, takes over from Achilles tendon injury victim Rhys Priestland to win his 12th cap in a Wales career that began in 2008 against Canada.

Since then the 6ft 2in, 14st 8lb Biggar has not been involved in any Six Nations games while Stephen Jones' 104-cap career continued, then saw Priestland overtake him in the Wales pecking order.

Before the injury that ended his tournament hopes, Priestland had been criticised to such an extent that he

Howley says the decision between Biggar and Hook, 27, who has won 26 of his 67 caps in the Six Nations was "close".

The Wales coach says Biggar is the in-form stand-off, having impressed in recent Heineken Cup games for Ospreys against Toulouse - twice - and Leicester.

"I think it's important that he gets an opportunity and please can you keep the pressure off him," said Howley.

"All our 10s that have played the game, we've seen what's happened over recent times when the number 10 in Wales [has come under pressure] - and it's important that he's given the chance to develop.

"It's a big game for Dan. Obviously he understands that, but [because of] our Welsh culture and the way we talk about our 10s, it's important that Dan is given an opportunity and a chance and he'll certainly be given a chance from the Welsh management.

"He understands there's competition with James, but it's a big starting game for Dan and he's been exceptional this week.

"He's a key player and we'll support [him] in everything which we ask him to do.

"Dan has matured over the last 12 months and he's been continually knocking on the door and we've given him honest feedback in terms of his game management and his running threat and his kicking game.

"And I think from Dan's perspective, I think turning up on Saturday being confident, going out and playing the game as he sees it [are important].

"They're the questions that Dan has to answer on Saturday.

"But it's important that he gets the time.

"When you speak to the likes of [Wales skills coach] Neil Jenkins and when Hooky was there, Steve Jones, Rhys Priestland - they were given time.

"And I think Dan's got a great opportunity on the weekend and I think that it's important that he just focuses on facilitating the team and that's what you want your half-backs to do, to bring out the best in the players around you.

"And I'm certain Dan will do that."

Full-back Leigh Halfpenny will take Wales' kicks at goal and Howley believes that will allow Biggar to concentrate on his tactical role.

"I think that it will be a positive, not a negative [for Biggar]," said Howley.