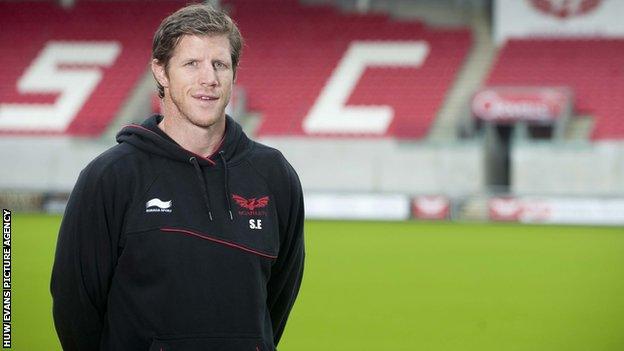 Grand Slam champions Wales begin the defence of their Six Nations title at the Millennium Stadium on Saturday, 2 February.

Easterby now coaches in Wales with the Scarlets but won 65 caps for Ireland between 2000 and 2008.

"It's hard to call because there are no games to go off," he said.

The Irish international, who played most of his rugby and now coaches in Wales, believes the first weekend of the Six Nations is always a lottery to call.

Easterby played alongside players like Brian O'Driscoll and Gordon D'Arcy in the Ireland side and now has nine of his Scarlets players in the Wales squad.

"There is no form going into the first game and you don't really know where sides are coming from," said Easterby.

"Ireland had a very convincing win at the end of the autumn internationals against Argentina, who were for me a little bit fatigued anyway.

"So there were a few factors in that (win).

"Wales probably should have beaten Australia. And it's hard to call because there are no games to go off and there have been a few months since those last games."

Ireland enjoyed a much more favourable autumn campaign, winning two of their three games against Argentina and Fiji, but losing 16-12 to South Africa in Dublin.

While Wales were whitewashed during their autumn Test series, losing to Argentina, Samoa, New Zealand and Australia.

But while Wales may have lost their last seven games on the trot, they are on a three-match winning streak against Ireland.

Easterby, a former British and Irish Lions flanker, has identified an area of the game which he believes will hold the key to victory for both sides.

"I think it is really tight," said Easterby.

"If Wales can get their strike runners into the game, particularly in their backline, they are always difficult to handle.

"Wales showed that in the World Cup against Ireland, it will be down to who can get their ball-carriers into the game.

"Ireland didn't do that in the World Cup and they lost because of that."

Easterby has also dismissed Wales' recent run of seven defeats and whitewash in the autumn campaign, and points to their record of three Grand Slams in eight seasons.

"Wales have often come off the back of not the best of autumns and produced some really good displays in the Six Nations," said Easterby.

"So you cannot really rely on what has gone before. They have had some poor results in the autumn and then gone and won a Grand Slam."