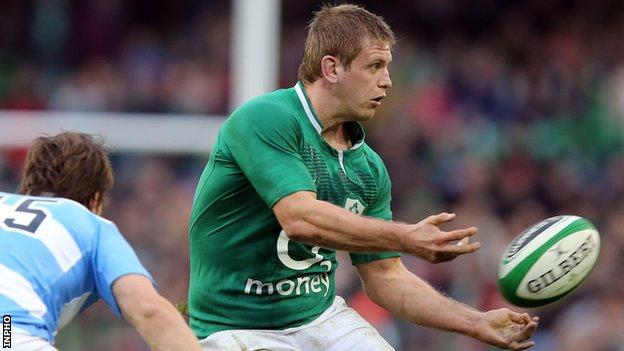 "I don't take anything for granted. I know I'm very lucky to play this game."

The above sentence sums up Chris Henry's grounded attitude.

It may be less than a week before his likely Six Nations debut for Ireland against Wales but the 28-year-old Ulster flanker only has to look back little more than five years to a time when a promising rugby career appeared to have hit a roadblock.

At that stage, Henry, despite having captained the Ireland Schools and played at the Under-20 World Cup, was having genuine doubts whether rugby was going to be his profession.

"In the last two years of my geography degree at Queen's University, I was on a development contract at Ulster but it was very much ifs and buts for me," recalls Henry.

"There had been injuries in the back row for Ulster but I wasn't getting any opportunities.

"I was nearly away across the water (to other clubs) on a couple of occasions.

"At one stage, I actually did air traffic control tests which was what my father did as a job and was something I had always been interested in.

"I was set to do the second stage of air traffic control exams but two weeks before that I got my first cap for Ulster and (I have basically) started ever since.

"It just shows how close it could have been to a different path for me."

Current Saracens coach Mark McCall was in charge of Ulster during those seasons of doubt for Henry and there is not a trace of bitterness in the flanker's words as he recalls his struggles.

"You had Neil Best, Neil McMillan and Roger Wilson....all pretty powerful back row players available to Ulster in those days and I still had a lot of conditioning work to do.

"Luckily I decided to stay with it and keep my head down."

After Henry's Ulster debut, within a year he was playing for the Ireland A team and his first full cap came a mere 12 months further on as he lined out against Australia in June 2010.

By that stage, Henry was already regularly captaining Ulster and a month prior to winning his first Ireland cap had been named as the province's player of the year.

What made Henry's impressive performances truly remarkable in the 2009/10 season was the fact his father William had been diagnosed with bowel cancer and passed away six weeks before the flanker's Ireland debut in Brisbane.

William was a past president of the Malone club and the Henry household was steeped in the game.

"My Dad was my biggest fan and came to every one of my games. He was diagnosed with bowel cancer at Christmas the year before, had a stroke at Easter time and then passed away on 8 May.

Unprompted, Henry moves on to talk about the tragic death of his Ulster team-mate and close friend Nevin Spence last September in a farming accident which also claimed the lives of his father Noel and brother Graham.

"I was chatting to a few players who were playing with the Ireland Wolfhounds on Friday night and we were all saying that Nevin, who had an A cap, should have been playing.

"It's not the sort of thing we talk about all the time. It doesn't really need to be mentioned but it's there. He's still very much missed in the squad of players."

The Ulster players have paid tribute to Spence's memory by producing a tremendous season to date which has seen them take a 11-point lead in the Pro12 and also comfortably qualify for the quarter-finals of the Heineken Cup.

Henry says previous coach Brian McLaughlin - who controversially lost the Ulster job a year ago - "sorted the team out and did so much for us" but he acknowledges the "new dimension" New Zealander Mark Anscombe has brought to the province.

"Mark demands an awful lot of the players. He has a lot of new ideas and the way we are trying to play rugby is very different.

"His style of play has been great and he has been lucky that he still has Neil Doak, who has been there from the beginning, and Jonny Bell, who was also with Brian, and know the players well."

Henry will hope that his man-of-the-match display for Ulster against Castres 10 days ago will help to convince Ireland coach Declan Kidney to retain him at number seven - even though Sean O'Brien is fit again after missing the autumn internationals.

"Obviously, you go out to play well every week for Ulster but definitely in those European Cup games before the autumn series and the Six Nations, you want to try and play your best because those are the ones the (national) coaches are looking at."

Kidney is not a coach known for dishing out individual plaudits but he did make a point of describing Henry's display in the hammering of Argentina in November as "exceptional".

Whether Kidney's recall of that display and Henry's recent excellence is enough to keep him in the starting line-up remains to be seen.

There is speculation O'Brien could be switched to blindside flanker allowing Henry to start at number seven with the other apparent combination seeing Munster's Peter O'Mahony drafted in alongside O'Brien with the Ulsterman dropping to the bench.

"In training, we've been rotating a lot but until you are sitting in the room with all the players and Declan reads the team out, you never know what can happen.

"I've only had four games for Ireland but I've been involved for quite a few years now.

"I get on really well with Declan. He gives me feedback on my game, things to work on and I'm hoping Declan thinks I can do a job for him at seven."

In the build-up to the Six Nations Championship, the big talking point surrounding Ireland has been Kidney's shock decision to remove the captaincy from Brian O'Driscoll with Jamie Heaslip now skippering the side.

Not surprisingly, Henry is careful to emphasise the leadership attributes of both men.

"There's no hiding that Brian is an incredible leader. We're just lucky that Jamie did well in the autumn but Brian is still going to be there.

"In training, when Brian feels that something needs to be said, he still speaks.

"It was going to be a tough call, but I'm fully behind Jamie as well. He was thrown in at the deep end in the autumn. He didn't expect it but he led us really, really well."

A diplomat and nice guy to the end. It's doubtful, O'Driscoll, Heaslip or any of the other Ireland squad members would have a bad word to say about Chris Henry.