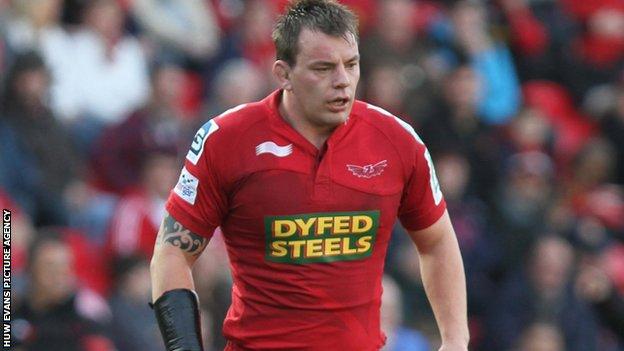 Former Wales captain Matthew Rees will leave the Scarlets in the summer after signing for the Cardiff Blues.

The British and Irish Lion hooker, who will leave Parc y Scarlets after nine years, has signed a two-year deal at Arms Park.

The 32-year-old has won 57 Wales caps and has captained his country eight times.

"Leaving the Scarlets has been a tough decision to make after being there for so many years," said Rees.

"The Scarlets is where I established myself as a player however I feel that this is the right decision at this point in my career.

"For me personally, I feel that moving to the Blues will provide me with a fresh, new challenge that I am ready to tackle.

"I'm proud of all that has been achieved during my time at the Scarlets and it was a huge honour to captain the team for two seasons.

"There's plenty in our squad and all to play for this season in the league. I'll give my all to the Scarlets campaign as we target a play-off place in the Pro12 after such a strong start this season."

"We've had some great highs during that time in Europe and the Celtic League and I am grateful for the opportunities I have had with the Scarlets as my career has progressed from region to country to the British Lions.

"I just hope I've been able to pass on some of my experience to players that will be of benefit in the future and my involvement has helped accelerate the transition of this squad in recent years."

Tonyrefail-born Rees has appeared 175 times for the Scarlets since he joined the region in the 2004-05 season.

Rees was famously part of the all-Welsh front row, along with props Gethin Jenkins and Adam Jones, for three Tests for the British and Irish Lions against South Africa in June 2009.

He has previously played for Treorchy, Pontypridd and the now defunct Celtic Warriors and he became Wales 128th captain when he was appointed to the role in November 2010 against Australia.

But Rees has struggled to hold down a first team place at Parc y Scarlets since he missed out on the Wales' World Cup campaign in 2011 through injury.

Easterby paid tribute to Rees's influence on the current crop of players at Parc Y Scarlets.

"We respect Matthew's reasons for moving to a new region and wish him all the very best with the Cardiff Blues," said Easterby.

"He leaves with our sincere thanks, gratitude as a region and respect for all he has done and achieved in a Scarlets shirt."