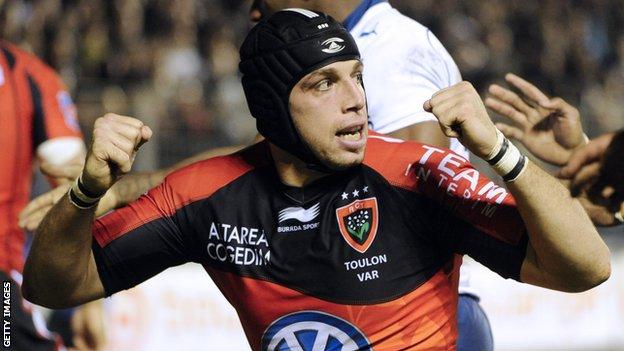 Worcester Warriors have agreed a deal to sign Toulon back-row Leonardo Senatore for next season and have given Chris Pennell a new contract.

Argentina international Senatore, 28, who can play at either flanker or number eight, will join in the summer.

"He has been on our radar for the last few years and he has been in fantastic form," said coach Richard Hill.

Like the vast majority of Argentinean players, Leonardo Senatore is very passionate about his rugby, will give everything and is very dedicated

Worcester-born full back Pennell, 25, has agreed new terms with Warriors after 16 appearances this season.

"Chris's attitude and work ethic is superb," added Hill. "He's really developed himself as a player

"He has the full confidence of the team around him, is fantastic under the high ball, a good defender and a strong runner.

"Chris has all the qualities to get even better. This is a very important re-signing for us."

Senatore, who has 17 caps for the Pumas, moved to Toulon after appearing in the 2011 World Cup but has been allowed to leave France for Sixways.

"Leonardo is a fantastic signing," said Hill. "Like the vast majority of Argentinean players he is very passionate about his rugby, will give everything, is very dedicated and extremely loyal.

"He has good technical ability and is a strong ball carrying back row forward of considerable size."