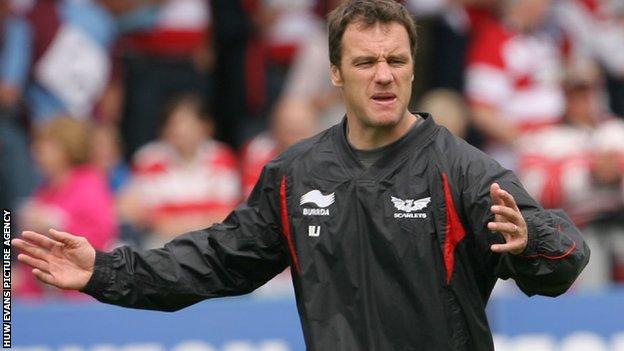 Mark Jones says he is honoured to be part of Wales' coaching team for the Six Nations.

The Scarlets' attack coach will be assistant to Wales interim coach Rob Howley for the duration of the tournament.

He will return to the Scarlets after the tournament before re-joining Wales for the summer tour of Japan.

"It is a huge honour for me to be called upon by Wales for the forthcoming Six Nations," he said.

"I am looking forward to this exciting opportunity for me to develop further as a coach."

Jones played 47 times for Wales on the wing, experience Howley believes will be invaluable as Wales attempt to defend their Six Nations title.

"Mark is an important addition to the coaching team," said Howley.

"He has played the game at the highest level and developed his coaching skills during his time with the Scarlets.

"He is a 'hands on coach' and understands how our environment works which is important leading into the tournament.

"I'd like to thank Simon Easterby and the Scarlets for allowing Mark to join us and to start work immediately."