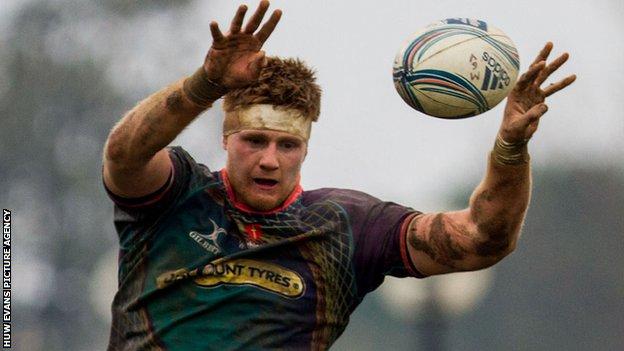 Dragons forward Andrew Coombs says he's "blown away" after being named in the Wales squad for the Six Nations.

His ability to play in the back-row and at lock means Coombs, 28, provides cover in an area where Wales have suffered a string of injuries.

"It was a massive shock. I was blown away when our coach Darren [Edwards] told me the good news," he said.

Bradley Davies was due to undergo surgery on an ankle injury on Monday.

Luke Charteris is out for the rest of the season, Alun Wyn Jones could return midway through the championship, while Ian Evans and Ryan Jones are both struggling with injuries.

But even with the current spate of problems, Coombs confessed he did not expect to get the call from Wales.

"I knew there was a lot of injuries and they'd be looking at other players to step in and fill the shoes, I didn't think it would be me," he said.

"But things happen and happen for a reason so I can't wait to go."

Coombs' call-up is a reward for a series of impressive displays in a struggling Dragons side. But the player was quick to pay tribute to his time at Newport Rugby Club.

He spent two seasons there before getting the call to join the regional set-up at Rodney Parade, and says that provided a solid grounding in the rudiments of the game.

"I learned a lot playing with the people in Newport, the coaches, the players," he revealed.

"It was hard work. You know a lot of players come through and go straight into academies these days, but I missed all that because of my age.

"I don't think it's been this open for a second row to come in before. They've got massive trouble there at the moment but I just hope I can come in, hopefully get a cap and impress and do them proud."