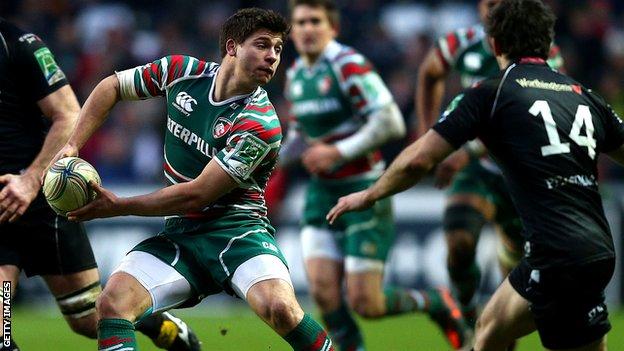 - Who will win out of Leicester v Toulouse on Sunday, 20 January

- Who are his favourites to win the Heineken Cup

- The three-way fight for the England 10 shirt

- Who is the best overseas player in the Premiership

The game coming up this Sunday, Leicester v Toulouse, who do you think will end up winning the match and ultimately Pool Two? Jamie Russell

Hi Jamie, it's another humdinger of a game with a winner-takes-all scenario. It doesn't get much bigger for these teams and failure for either of these two, with their impressive records in Europe (Toulouse have won the Heineken Cup four times, which is the most, while Leicester have won it twice), means another fallow season without the top prize and they won't want that.

I haven't been overly impressed with Toulouse this season, they seem a bit slower and less eager to attack, relying more on their massive forwards bulldozing to the line. Tigers won't mind that type of game, although I believe they should.

Hi Jerry, who do you reckon are now favourites to win the Heineken Cup (keeping in mind the form of all the teams this weekend). Tom leman

Hi Tom, Clermont and Toulon would be my favourites, closely followed by Ulster and Harlequins. Those four look most likely to get home draws in the quarter-finals. All eight teams that eventually qualify will be hard core and capable of beating most of the rest.

Defending champions Leinster could sneak through and who could bet against them with all their star backs coming back from injury.

Hi Jeremy. With his break against Ospreys on Sunday a perfect example, do you not think that Toby Flood has an attacking side to his game that Owen Farrell lacks? Furthermore I know Farrell is great at goal-kicking and has a good temperament but his passing is awful and it seems that Flood starting with Freddie Burns on the bench would provide us with far more tries, which would make up for the penalties? Mchal

Hi Mchal, the competition between, Flood, Farrell and Burns will run for a while because in their own ways they are very good at what they do for their clubs.

Even though Farrell didn't miss a kick against Racing Metro for Saracens at the weekend he didn't make any breaks or metres with the ball in hand. Flood made a couple of breaks for Leicester and some yards but had a poor day with the boot.

I would be surprised if Farrell doesn't keep his place for the Scotland game because England boss Stuart Lancaster tends to be loyal. Flood looks as though he runs the Tigers when he plays for them and has that aura about him in a Leicester shirt, but we don't see it often enough when he plays for England.

Your 10 has to be the boss, no matter how inexperienced he is, and age isn't a consideration so long as that player can listen and make good calls. Farrell has his limitations but he's consistent at what he does, unless he's tired, as he was during the summer tour.

If your forwards are having an off-ish day Farrell's not your man, you'll need Flood or Burns to turn the game in your favour. I reckon England will go with Farrell and Flood on the bench. I would have Farrell or Flood start, with Burns on the bench.

After another superb performance for Harlequins at the weekend showing great power, awareness, deftness of pass and great set-piece work, should Nick Easter be on the Lions team sheet even if Lancaster thinks him too old for 2015? Mikej

Hi Mikej, I believe Easter will find it hard to get a place on the Lions tour ahead of Toby Faletau and Jamie Heaslip, and either David Denton or Kelly Brown. It's tough on Easter but that's how it's rolling for the foreseeable future in international rugby.

Despite him not being selected for England he must be mighty pleased because inside he knows he's playing the best out of all the number eights in the Premiership, and possibly Europe.

With both Joe Marler and Chris Ashton being binned at the weekend for off-the-ball scuffles and the well-documented previous records of players like Northampton duo Dylan Hartley and Calum Clark, do you think ill-discipline could play a huge part in England's Six Nations campaign? Muesli3

Hi Muesli3, discipline always plays a part in a game, but in last year's Six Nations England gave away on average 10 penalties a game, which was the second lowest in the tournament.

In the autumn it went up to 11.5, which would be a concern, because I think most teams look at about 10 per game being the maximum you should give away. Given how Lancaster has handled the job so far I wouldn't expect him to have a lot of patience with players who can lose him and the team games because of their indiscipline.

Jerry, how long do you think it will be before Sarries' youngsters progress from the Saxons to the full England squad? Flanker Will Fraser has been outstanding and centre Joel Tomkins has showed exactly what he is capable of. dicko4

Hi, the back row is an incredibly competitive position and despite Fraser putting in good performances, the likes of Tom Wood and Tom Croft will remain ahead for a while longer.

Tomkins has the skill set to do well. By his own admission he's taken longer to adapt than he would like, so once he gets comfortable he could really fly. However, again you look at England's centres - Manu Tuilagi, Jonathan Joseph, Brad Barritt and Billy Twelvetrees - and Tomkins has some work to do. As always playing in a winning team will always help push their cause for those two.

Hi Jeremy, what do you think has caused Edinburgh's complete failure in the Heineken Cup this year? And can there be any positives taken from this season's campaign? IainDuff

Hi Iain, Pool One is very hard and Edinburgh would have done well to get out of their group. However, by their standards, having in the past previously beaten Leinster and Toulouse at home, those teams shouldn't have caused any psychological hurdles.

Looking at their stats in the Heineken Cup they have the lowest average penalty goals scored and the highest turnover rate against them. That says to me they aren't pressurising teams enough because they give the ball up too easily.

With Nick de Luca now injured who would be your pick for the Scottish number 13 jersey? JL9

I'd be tempted to put Tim Visser in at 13 and gets Max Evans back on the wing, where he played for French side Castres at the weekend.

Hey there! Apart from the position of lock where Wales have been unlucky to lose numerous players, do you think that the injury "crisis" resembles a lack of depth in certain positions as opposed to anything else? findingmyfeet

Wales don't have the number of players of France or England so losing just a few makes a difference but with a dozen men out, that's going to stretch any team's resources. Losing world-class or close to world-class players is hard for any team to replace.

Jeremy, with the announcement of Pat Lam as Connacht head coach this now adds a Samoan to the three Kiwis who are coaching the four Irish provinces. Is there a dearth of good Irish coaches or is this simply the nature of the professional game? IrishLock

Hi, getting home-grown coaches into those roles would be ideal but with the professional game it's going to be rare that an organisation is going to employ a raw home-grown coach out of the lower levels of the game. I guess former Ireland boss Eddie O'Sullivan was felt not to be the right man for the job.

Who do you rate as the best overseas player playing in the British Isles. JSW

Hi JSW, as a Bath man it's going to sound a tad biased, but I really rate South African flanker Francois Louw. The style of play in the Premiership fits well for him and the 27-year-old's made a real impression. He's been a star performer and a model professional, and his performances for Bath have got him back in the South Africa team.