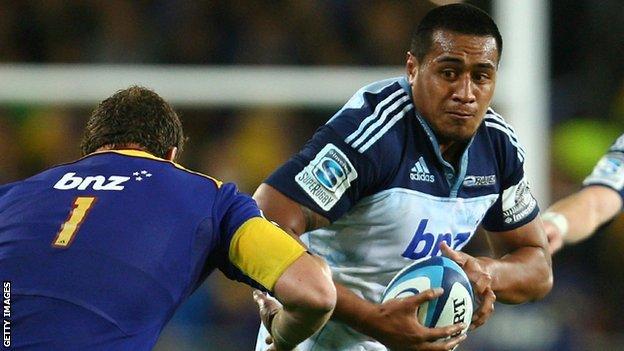 North Harbour team manager John McKittrick confirmed the player hopes to be in Cardiff by the end of January.

"He has signed a contract with Cardiff Blues," said McKittrick of the three-times capped forward.

The Wellington-born player has also had a stint at Pro12's Ulster in 2009.

He won his first Test cap in Wales, facing Canada at Eirias Park, Colwyn Bay in November before helping Samoa beat Wales 26-19 in the same month.

McKittrick says Cardiff Blues will have a rangy, physical lock at their disposal after their New Zealand namesakes dropped the player ahead of their 2013 campaign.

The 6ft 7in, 18st 9lb player's arrival will add depth to the Blues' pack when they would expect to lose locks Bradley Davies and Lou Reed to Wales Six Nations duty.

In November another Blues lock, James Down, was called into the Wales squad amid an injury crisis.

And national coach Robert Howley is already without Perpignan's Luke Charteris and Ospreys lock Ian Evans while another Osprey, Alun Wyn Jones, has also yet to return after he was injured in Wales' defeat by Argentina in November.

McKittrick added: "I actually met with Filo a couple of days ago to organise his New Zealand clearance, but I didn't talk through the specifics of his contract.

"As soon as his international clearance comes through, I think he's hoping to be in Cardiff by the end of January.

"It's only positive for Filo.

"He had a very successful northern hemisphere tour with Samoa [and] was desperately unlucky not to be retained by the Blues for the upcoming Super season and I think he's taken the sensible option in pursuing a career with the [Cardiff] Blues.

"He's a very rangy lock, very physical around the breakdown. He can really move bodies and has exceptional line-out skills.

"He's one of these guys that doesn't panic with the ball in the air.

"He has what we term very good hang time; very effective [jumping] at two and four in the line-out.

"But he's especially physical around the breakdown.

"We will miss him sorely, but unfortunately that's the situation with ITM Cup in New Zealand.

"It's a feeder competition to international rugby and we wish Filo all the best.

"He's had 42 games for the North Harbour province and we hope that some day he returns and brings up the magical 50."