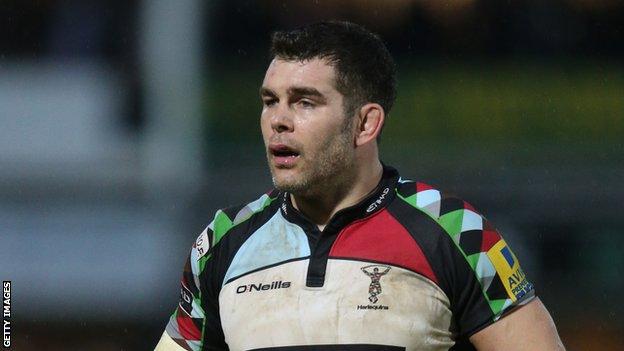 Evans told BBC London 94.9: "I think he has been the form number eight in the Premeirship, if not Europe. He has been fantastic for us.

"His work load is immense and his metres carried and off-loads are a massive part of his game."

Evans acknowledged that England had gone for a more youthful-looking side since the World Cup but continued: "The experience he [Easter] brings to us, especially in the forward pack, is fantastic."

Easter, who has featured in all of Harlequins' Premiership games this season, missed out on England's elite squad for last year's Six Nations and was not included for the autumn internationals either.

However, Evans, 32, feels a place for his clubmate in the British & Irish Lions squad for the summer tour to Australia is not out of the question.

"He's still available and could possibly go on the Lions tour. That is motivation for him to keep those performances up.

"He may have been snubbed by England but he has that chance with the Lions. That is kind of willing him on and he still has personal pride," said Evans.

"It is good to put one over the coaches by playing really well and prove he is worthy of a spot.

"The more the media talk about him playing well the more pressure there is on the guys making those decisions."

Meanwhile, Evans says the number of other international player Quins have in their squad is testament to how far the club has advanced in recent years.

"Some of us don't get to go into those squads but it is a fantastic credit to the way the team has evolved and has been performing," the former New Zealand international said.

"We see a lot of guys getting picked for their countries.

"It means a lot of opportunities for young guys to come in and stake their claim and push those guys for spots."