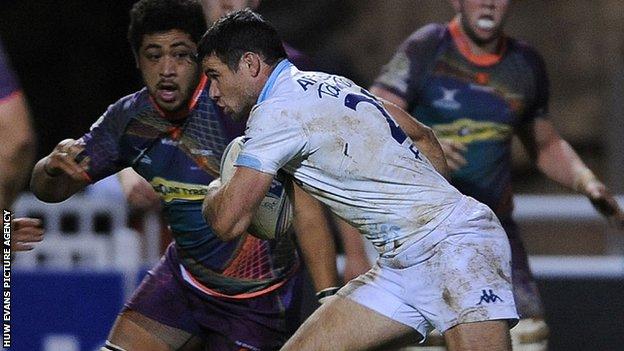 Wales scrum-half Mike Phillips broke Dragons hearts as he burst over for a late try to clinch a dramatic win for Bayonne in the Amlin Cup.

The Welsh region had led with four minutes left thanks to a try by captain Lewis Evans and five penalties and a conversion by Tom Prydie.

The Dragons attacked until the final whistle, but were held out.

The Dragons were in control up until the hour mark when they took a 13 point lead, but the introduction of giant prop Nemiah Tialata and Phillips midway through the second half turned the tables.

Bayonne fly half Jacques-Louis Potgieter gave the home team a first minute lead when he slotted a straight-forward penalty, but Tom Prydie levelled after 10 minutes, and there were another 11 uneventful minutes before the next score.

View from the commentary box

The Dragons were in control until Nemiah Tialata came on, but then the momentum just seemed to change.

Again it was Potgieter who was on target with a simple penalty.

But the Dragons took a shock lead from the restart. Left wing Michael Poole charged down Potgieter's clearance and flanker Lewis Evans gathered the loose ball and charged over for a gift try, which Prydie converted.

There was more trouble for the French side as superb interplay by the Dragons freed scrum half Jonathan Evans who was brought down illegally by fullback Sam Gerber.

Prydie kicked the resulting penalty and Gerber was sent to the sin-bin by referee Andrew Small.

Potgieter hit the post with a simple penalty, but Prydie made no mistake from 35 metres to give the Dragons a 10 point cushion five minutes before the interval.

And with their experimental back row leading the way in defence, the Welsh team were not troubled further before half time.

Bayonne employed high risk tactics at the start of the second half, using quick throw-ins and running from deep in their own half.

And the Dragons should have punished them in the 49th minute when Will Harries probed down the left and Bayonne were forced to kill the ball at a ruck. But Prydie put his penalty attempt the wrong side of the post.

It was a brief reprieve however, as another over-complicated move came to grief and this time Prydie made no mistake to extend the lead to 13 points.

The entry of Nemiah Tialata shored up Bayonne's creaking scrum, and he won a penalty which led to the home team kicking for the corner and driving over for a try from the lineout, with David Roumieu claiming the touchdown.

Potgieter converted to bring Bayonne back to within six points.

The French team's high-tempo style finally began to stretch the Dragons, who were also struggling to hold the scrum at bay with Tialata causing chaos.

The Dragons repelled wave after wave of close-range attacks by the French, but a long, looping pass finally freed Gerber to squeeze over in the left corner.

Prydie gave the Welsh team a lifeline when he slotted a penalty from close range to make it 22-18 with 11 minutes remaining.

But it was another Welshman, Bayonne's Mike Phillips, who had the final say.

His quickly taken penalty caught the Dragons napping, and he powered through Lewis Evans; tired tackle in the right corner for the decisive try.