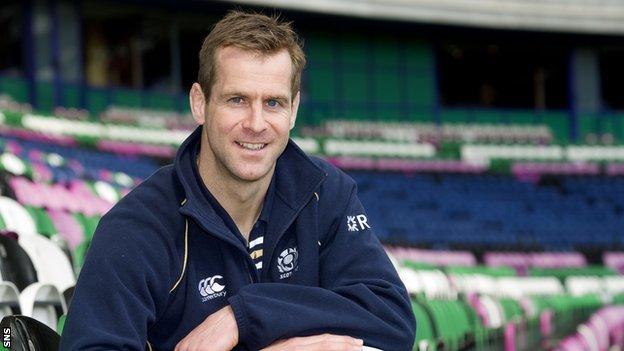 The 31-year-old number nine announced his decision on Monday not to be considered for international duty.

However, Paterson maintains the future is bright for the national side, singling out Edinburgh's Greig Laidlaw and Glasgow's Henry Pyrgos.

"There's a depth of talent in that position," Paterson said.

Scrum-half is a position of strength for Scotland, but we'll need it going into the Six Nations

Paterson added: "Laidlaw's now playing nine for Edinburgh consistently and playing well. Pyrgos at Glasgow's doing the exact same, with some young players like Sean Kennedy nipping at his heels.

"So, it's a position of strength for Scotland, but we'll need it going into the Six Nations."

Scotland start their Six Nations campaign against England at Twickenham, but Paterson feels that new interim coach Scott Johnson will have one eye on the longer-term.

"He wants to start with a bang," said Paterson. "But (he'll) certainly look ahead to the next World Cup in 2015.

"It may seem like a long time away, but now is the right time to plan for that."

The 109-time capped former full-back admits pressure on the Scots has intensified after falling to 12th in the world rankings.

"Yes, but there's desire there as well," he said. "When you're ranked 12th you have to fight to get up that ladder.

Paterson also warned Blair he will miss the cut and thrust of international rugby.

"He'll be fine with the first one. When the sixth or seventh comes along, that's when he'll get itchy feet," he said.