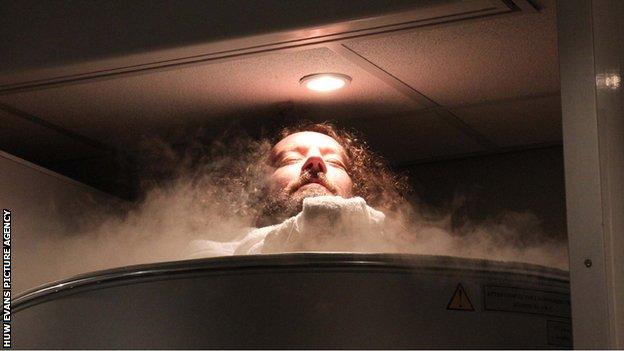 Caretaker coach Rob Howley has opted not to take Wales on their usual pre-tournament trip to Poland.

Wales have been regular visitors to Spala for training camps that include cryotherapy sessions.

But ahead of their Six Nations opener in Cardiff against Ireland on 2 February, Wales will train at their Vale of Glamorgan Hotel base.

"We have done particularly well against Ireland over the past couple of years and we can take great heart from that record," Howley told the Western Mail.

"That first game is always a huge match for momentum. We went over to Ireland last year and that win set the tone."

Although Wales are using the facilities at their National Centre of Excellence facility at the Vale rather than head for Poland, they will still have access to cryotherapy treatment.

The Welsh Rugby Union decided to build its own chamber at the Vale as cryotherapy allows players to train up to three times a day and sees them subjected to temperatures as low as -160C for a three-minute session.

The release of endorphins triggered by the low temperature speeds up their physical recovery.

"We are staying in the country this time," added Howley, who is in charge of Wales as head coach Warren Gatland is preparing for the British and Irish Lions tour to Australia in June.

"We have gone to Poland before on the last two occasions but it is a different environment now and we have chosen to stay at home.

"Hopefully we will have the English and French [Welsh players at clubs in England and France] players available for the three days in that first week of training."

The players at the four Welsh regions will be released 13 days before the clash with Ireland, with those playing in France and England available eight days before the match at the Millennium Stadium.

Under International Rugby Board regulations clubs do not have to release players until five days before a Test, but there is also a three-day training period that players can be required for three times a year.

Wales still have a number of injury concerns ahead of the Six Nations, while fly-half Rhys Priestland (Achilles) and lock Luke Charteris (shoulder) ruled out of the championship.

Another lock, Alun Wyn Jones, will miss the start of the tournament but his fellow Ospreys second row Ian Evans and Dragons back-row Dan Lydiate have an outside chance of being fit to face Ireland.

Scans revealed that wing George North escaped serious damage after injuring his neck at the weekend, but it remains to be seen if there will be any lasting soft tissue damage.

Perpignan fly-half James Hook is nursing a shoulder injury but should be fit in time, while props Adam Jones and Craig Mitchell, centre Jamie Roberts and full-back Leigh Halfpenny have all returned to action.