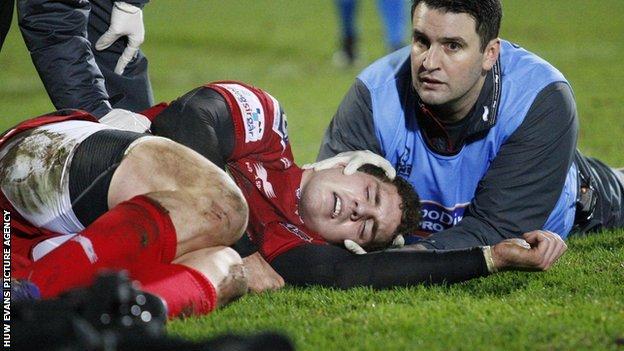 Wales wing George North could be available for the Six Nations opener against Ireland on 2 February after returning to training with Scarlets.

The 20-year-old was carried off during Scarlets 47-17 defeat by Ulster in the Pro12 at Ravenhill on Friday.

However, a scan showed there was "no serious damage to his neck" and he could be back for Saturday's Heineken Cup trip to Leinster.

"We have to know that he is 100%," warned Scarlets coach Simon Easterby.

"It's important we look after him. We have to see how he goes. We have to be mindful he has had a bit of a wack."

North has scored 11 tries in 26 appearances for Wales.

The national side has also been boosted by from the ruptured bicep he suffered against London Welsh in September.

Centre Jamie Roberts returned from injury for Cardiff Blues in their 17-6 victory at Munster in the Pro12 on Saturday while Leigh Halfpenny recovered from a neck injury to take a place on the bench for the Blues.

However, the defending Six Nations champions have significant injury worries ahead of the annual tournament.

and is a doubt for the British and Irish Lions tour next summer.